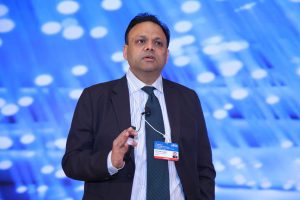 The whole concept of Government as a service is very new especially in a vast country like India, the learning from countries like Estonia with 1.3 million people and a few more million in Singapore are vast. But you know their digitization came before they tried to leapfrog into fourth industrial revolution. India didn’t have a choice, we are doing digitization and we are leaping into the fourth industrial revolution parallelly and in that parallel universe we have a citizen who is still not connected to the internet probably, has a basic mobile phone, lives in a remote corner of northeast, Rajasthan, Jammu & Kashmir or in Kerela but what has connected all of them is this unique thing that we talk about, Aadhar. Today almost 99% of the adult population has Aadhar. Now we can keep debating its issues on the privacy and the security and that’s in the national interest and that’s the right thing to do but it is really enabling us to deliver the government as a service.

I will give few examples and numbers, which are very important because four years ago when you talked about 2014 election campaigns those numbers would have looked at 600 million or so on Aadhar, 800 million or so on Telecom, 200 million or so on Smartphone. Today all these numbers have become threefold in less than four years. Natural growth and now of course impetus that has been given to digitization and digital India. Results are remarkable. Aadhar today is the biggest platform which is open source, is not owned by a private corporation, and has two or three main characteristics that nobody else has:

Number one, It is a most frugal platform in the world. The total cost of Aadhar so far is 8,000 to 10,000 crore rupees that is 1.4/1.5 billion dollars. 1.5 billion dollars for 1.2 billion users, just 1.2 dollars per person, that’s the cost of acquiring and maintaining a customer. Anybody in marketing will tell you the cost of customer acquisition is at least 10X or 20X or more than that and R& D even more. If you look at the cost, of R&D, and Customer Acquisition of Google, for example, it will be in the range of 50-100 billion dollars for acquiring their billion customers, that’s a comparison and the reach.

The second biggest thing, it is not private, it’s an open innovation platform.

The third biggest thing is it connects both digital natives and the digital non-natives. That makes a big difference in a diverse country like India, anybody not having an internet connection can also access via Assisted mode, via OTP’s. One of the biggest myths around is that Aadhar needs to be on the internet, it need not be. India is the only country in the world where an 8$ Candybar phone is equally powerful for doing a banking transaction as the 800$ apple phone and that’s the power of the platforms we’ve built and our whole philosophy of the government services is based on it.

Why I showed you the income pyramid? The 1000 dollar phones, the 50 billion dollar technologies you know end up the several top 1 or 2 billions of the world. The world is 7 billion people, not served by those technologies. India has 135 billion people at the bottom of the pyramid. Now if I have to launch a new service in this budget, let’s say ‘Ayushman Bharat’, the biggest health insurance scheme on the planet, which is going to serve the deprived class, 135 million families. To be able to do that I need technology at scale, I need business processes at scale but if my cost of delivering that per year is 40/50 dollars, I am going to fail. So by the prevalence of this Aadhar stack which is a combination of Aadhar (Identity), the paperless digilockers and your payments. All three working together absolutely seamlessly we will be able to deliver the Ayushman Bharat from a technical and scale perspective to every citizen of India who is entitled to it and that is re-imagining government as a service.

You know how many transactions does UPI Platform was doing in November 2016, just before the demonetization? 1,00,000 transactions per month. Today it does 20 crore transactions per month. That’s the amount of the behavioural change happened in 18 to 20 months. People from all parts of India are using it. It’s already providing identity, money, skills, education, and health. There’s this scene in the movie Munnabhai MBBS, where an old pensioner walks into the Government office and takes off his clothes because his file is not being signed. Today that’s no longer required, with the proof of life sitting from home. And more than 10 million people have already signed up for it. That’s the biggest service you can do for our senior citizens. They certify and get their pensions directly in their bank accounts and they certify every 6 months or 1 year depending on the business process and the policies around it. The societal impact of that is so amazing.

The government itself is using government as a service. You talk about Estonia, Singapore we still are a welfare state. We do a lot of social welfare schemes, more than 415 schemes today are being delivered on the Aadhar stack platform. More and more departments, more and more states are competing with each other to put their schemes on it. Why? Because they want to deliver governance and save money. 57,000 crore rupees have been saved using these platforms. How much was the investment on Aadhaar, 10,000 crores only, How much money saved? 57,000 Corores. Do the math guys. That’s the best ROI you can get.

And, ROI is not only for the Government but for citizens also. The citizens are able to save time, skipping the whole layers of the bureaucracy and corruption, getting money directly in their bank accounts. For governance, this is a game changer.

Ujala scheme reaches about 33 million people today we intend to make it reach 80 million households. Delivering and scaling up is part of the mandate. Why was MyGov platform created? Because policymaking should not be purview of the few. Can Indian participate in policy making, in giving ideas, crowdsourcing? Biggest companies in the world have been made around crowdsourcing. How does Google Maps work? It crowdsources the data you are generating, so many of us send data to Google all the time. We are crowdsourcing ideas, policies, and designs. We crowdsourced the Swacch Bharat design. Originally any design is made by a design firm and the Government ends up paying lakhs of rupees. Today the people of India make a design, submit it and rate each other. Polls happen every hour on social media. People decide a design or a logo or a policy if you don’t like a policy give us your comments so we put out policies for consultations now, everyday and within an hour we get hundred thousand comments on any policy any discussions. Experts from all over the country participate. The Swachh Bharat logo was one such idea. What did it cost us? A lakh rupees and a photograph with a Prime Minister. People of India decided the logo. That’s participatory governance- it involves people, taking their feedback and democratizing the decision making. There are still 600 million people in India who don’t have a smartphone, they can call in and give feedback to “Mann ki Baat”, lines are still open – 1922.

Lastly, let’s talks about the service delivery. Government services are being tracked on a daily basis, you can go to ‘Transforming India’ and know what are we delivering and how and where are we delivering it. This is management by KPIs – Key Performance Indicators. I want to increase data availability and share it with everybody so that they know what’s actually happening on the ground. To make things more inclusive we are launching an Aadhaar enabled device. We have brought down the cost, by using the mobile phones as a POS Machine as well asana Aadhar enabled device. I can go to any citizen today, ask them 5 questions and validate using Aadhar and tell them that these are the two schemes you are availing and these are the three schemes you are potentially entitled to and you can apply digitally with E-sign. We are taking “Sarkar to everybody’s Dwar. “Meri Sarkar Mere Dwar” We are using technology to take the government as a service to any place in India.

We already have a vast network for postal officers, post offices, CA, CSE’s, all of them will be enabled to use this technology. Friends I just want to conclude here, today we Indians should be proud that we have a world leading technology, frugal at scale and we’re not just stopping there. I think 6 times in the last one month the Prime Minister said that we need to build Artificial Intelligence for India. We need the latest technology, artificial intelligence, block chain and machine learning, forward looking stuff.

Ayushmaan Bharat is national health protection scheme. We are taking help of AI and Machine learning for claim management and to avoid fraud. And we have the advantage of starting from scratch, we are not fixing a broken system because we are leapfrogging into the new age, we can use the latest technology. 86% of cases in India mostly civil cases involve land disputes, Blockchain can be used for both the judicial process as well as ownership issues.