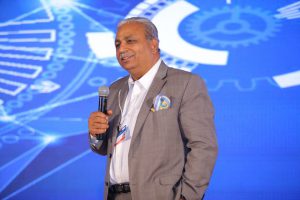 We believe in the trinity of Brahma, Vishnu, Mahesh where. Brahma is the creator, Vishnu is the sustenance and Mahesh (Shiva) is the destroyer. Now if the disruption is inevitable and it’s going to change the world. The question is who is going to be the creator? Will it be the millennials or startups or some of the larger companies re-inventing themselves? What is the role of the disruptor, what is the role of that Vishnu as a sustenance man or are these roles overstated? Maybe these roles don’t exist anymore. Maybe if I take Tech Mahindra as an example I mean I would strongly go back after this presentation and tell my Board that you should actually collapse all the three roles.

Look at it from a different perspective, the Founders were the Creators, the CEO becomes the sustenance guy, the destroyer is a guy sitting next door who wants to disrupt me. Is it not happening in every industry? So I tell the Board that guys, let’s flip all the presentations, my quarterly report typically talks about growth, profitability, CSR, what is the impact on the brand, I mean the normal items that every board measures you at. Now I am saying let’s flip it because we want to be the winner in this age of disruption. The first slide should be who can disrupt us. Is it a fair way of merging the roles? Number two is what will we create that will disrupt others and then we come to the normal sustenance kind of a business and I think if we follow that habit and it doesn’t matter whether we do it in the government or we do it as an individual. I think we will remain relevant maybe we will become winners. Jeff Bezos, the world’s wealthiest man, Is he the destroyer? Probably by the time another decade goes through and if Jeff Bezos remains on his path I think the destroyer word will be replaced by amazonify. Just think about it, the books business, the food business, the retail business, and the healthcare business to some extent and now if he chooses to enter banking. What is he doing differently? Ultimately he’s finding the inefficiency in others.

To me, businesses have always existed. People give Airbnb example but to me that businesses have existed for 100 years. People rented their flats, houses, people have continuously given away their assets on a weekly basis, on a daily basis, for some of us who belong to Delhi we even remember that the government had a scheme during the Asian Games “Athithi Devo Bhava” that we don’t have enough hotel rooms please become the host and allow the guests to come and stay in your house. Now was that called Airbnb? So point again is that history has not only examples but practices that some of us choose to ignore. Nokia and Blackberry ignored touch phone, somebody took an opportunity and made a business out of it. So we can go through all the examples ultimately we have to look at the only critical asset in this whole equation which is people. Now the question for all of us is how to make people ready to allow not to be disrupted but to become the disruptors. And how do we get down to a level where it is not one company or ten companies but where it is many companies. In Saudi Arabia, they have come up with a vision statement called 2030. Prince Salman is a challenger, he is the ruler and he is the challenger. Now if that man is challenging the whole of Saudi Arabia to move away from the oil-based economy to an alternate energy based economy I think he is showing a determination.

To me, the biggest destroyer is not Lord Shiva, the biggest destroyer is a guy called Elon Musk. See what is he doing?   Tesla is an example, he finally sent a spaceship and see what he did to the Finance Industry with Paypal, with SpaceX and Hyperloop he will destroy the airline industry. Now think about him as a genius- he is saying a car battery that is being used in a Tesla during the day will power the fuel at your house in the night. I mean he created a billion dollar industry out of solar panels or the solar cells. Let’s think about it, there is a power storage which is sitting in your car when it is not being used why it cannot be used to power your house. We have only looked up at one point of view think about the solar panel continuously charging. We suddenly solve the problem of storage of power. I mean today we assume the solar power is only available when the temperature outside is 30, 36 or 42 degree.

So I can only request to all of you, first play the role of Brahma, Vishnu, and Mahesh in your own lives. And if you do it and if you become relevant if you become the challenger and if you become the Elon Musk, we will come out as winners as we have to start with ourselves, most of us have the answers but we choose to become the Robots. Let’s not worry about artificial intelligence rather worry about enhanced intelligence. Let’s use the extra intelligence that we all have. I want to again request everybody that the Trinity or the three lords that we all follow by worshipping in different formats in Hindu Mythology there is a message there and if you follow it and if you merge those roles and if you interchange those roles I think there is a winning strategy and we need to start ourselves so I want to say thank you guys and thank you so much.