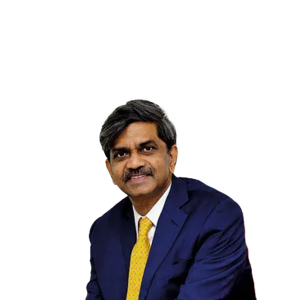 Having held the position of CEO for many brands, Mr. Shiv Shivakumar, Past President, AIMA & Group Executive President, Aditya Birla Group has helped build brands. A regular writer on leadership, innovation, business models, and digitisation, he was most qualified to deliberate AIMA’s LeaderSpeak Session on- ‘Reinventing Organisation for Automated Business’.

The Covid pandemic has changed the structures of businesses including automating them for smooth function. The flip side, however, is that it could also replace manpower and in the process, with many giving up their jobs. So, what is the middle path that can be adopted when implementing automation?

Mr. Shiv Shivakumar started the Session by saying that the implementation of automaton in a Company needs the integration of processes and technology on all levels. To elaborate further, he said that the things that organisations strive for are- efficiency, productivity, accuracy, collaboration and flexibility.

The concept of automation for companies earlier was typewriters, where a secretary was the hub of information. Also in the earlier days, with men going joining World War 2, women started to work hence the automation at home started with refrigerators, microwave ovens, dishwashers and washing machines in order for them to save household work time.

With age, the progress of automation led to the first E-mail being sent by Computer Programmer, Ray Tomlinson in 1971. The E-mail then became a standard feature in organisations by the 1990s. The first SMS through a mobile phone was also delivered in 1992.

The WiFi also came into being then after. The next big innovation was WhatsApp which came into use in 2009. The USP of this invention was the “double blue tick’ suggesting that the message had been read.

A lot of things of utility have undergone automation over the years. There has been automation in Sports as well. The Indian Premiere League (IPL)for example, has revolutionised the field, where everything is automated. The Indian Railways is a hallmark of how automation can make things smoother than anticipated. Right from Ticket Bookings, Meal Orders and more.

Mr. Shiv Shivakumar said that AI (Artificial Intelligence), ML (Meta Language) and IoT (Internet of Things) were on even before Covid. There are 1.5 Billion PCs and 3.5 Billion Smart Phones globally. As for robots, there are 2.4 million robots installed globally that will slowly replace manpower. China, Japan, Korea, USA and Germany are already dependent on robots for Company Operations. They will have a huge impact on the Transportation Sector, Auto Sector and Construction Sector. Besides, ChatBots are already replacing humans for Customer Queries.

He concluded by saying that companies especially at this time want to be lean, agile and scale up quickly so automating becomes imperative. Automation was there for a long time and the “the future of work will be automated with more inventions happening”.