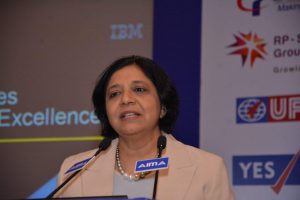 So today I want to take a slightly different perspective. Preetha talked about the vision of the futuristic city that’s what someone immediately conjures when we hear the phrase  smart city but I want to step back a little bit when we look at what really makes a sustainable model of country and economy or community. It’s a combination of physical infrastructure, social infrastructure, and financial infrastructure coming together with a very strong underpinning of governance and strategic blueprint. And when you look at the different elements, the topic of this particular panel is can Indian cities become global centers of excellence? The answer is yes, the answer is a resounding yes, not because we hope, not because we will but because there is a scale at need, need at scale, extraordinary need and at a very high scale with some natural resources which are also at scale. So it’s now about putting together a framework, a structure and a model that allows us to actually satisfy our demand and at the same time produce capabilities that are not just relevant for India but for the globe as well.

We know this as a company from our experience in India with the telecom industry. We scaled here faster than any of us or our clients could have expected. There was growth and scaling of proportions where we were continuously wrong about the pace of growth and it is one of the countries where the cost to serve and the average revenue per user is one of the lowest in the world. So that needed a set of innovations, a set of business models coming together with technology that would allow us to build capabilities and therefore our first global telecom center of excellence was built for our company in India to serve the rest of the world and it’s the same across a variety of different places.

If I pick power, India is the fourth largest producer of wind power; probably the second largest in terms of gigabytes of power but there are 3 hundred million Indians without access to power. We have one of the highest leakages in terms of energy leakages so it does require and the demand and supply are not going to meet very quickly. The supply side can only expand to the extent that is physically possible which means that we have to use technologies and policies together to manage the demand side to make that come together. Things like smarter grid using analytics to ensure that wind farms can be most productive in terms of maintenance, in terms of driving wind energy on days that the winds are going to be at the highest.  How we harvest it, how we manage it, use of analytics, smart metering, use of a variety of technologies both in the generation and distribution side and the operation side, know that we can actually use much more of the energy that we produce by just managing the demand side of the equation while we continue to invest in the supply side.

Let’s take another area – social infrastructure.  All of us who watched any of the CNN news over the last few days see a level of strife in US cities. The bright city where the youth is not educated is not a good option. Smarter cities, smarter countries will have a social infrastructure where youth and we have an extraordinary asset in the youth in this country, have to employable. And when you look at the demand and the supply side of education and this is an area which is very close to my industry because, for my industry, education and skills are extraordinarily important to continue to drive the value. We will need as a country to educate over 300 million students. If you look at the vocational areas over the next decades 700 million and we will need at least a thousand universities and 40 thousand colleges over the next decade to meet that need. Is that physically possible? Not really which means technology again becomes an underpinning for us to look at massive online courses. Uses of capabilities and platforms, which can actually supplement qualified teachers where content can come and be disseminated in a manner that is fair whether you are in rural India or urban India or semi-urban India.

Now the platforms exist, the technology exists and this is where I think I look to the minister and other parts of the government where we will build a digital platform because digital India is central to a smarter India and living in a smarter area.  If you have a national registry of students and content, that can be built,  a level of certification that is brought about so that employees and employers alike know what the quality of and the capability of the students are and a little more flexibility in the model of education. I think this is again an area of private-public partnership that can extend skills in  innovative ways and deliver in ways and nowhere else in the world I think, we have the possibility of the demand side as well as the capability of the supply side because then we don’t have borders and you can have professors sitting at the Berkley school and  delivering content to students here. Some of that still happens but not at scale. So the combination of the technology with policies and platforms and some level of structure allow us to address the social infrastructure side.

Because of the paucity of time, I won’t go into health. Again an area where we have 38 million diabetics in the country and only 3 million of them get care. So when you look at health care another initiative with Berkeley’s school,  Apollo Hospitals and IBM working together  to find ways of providing, rendering health care  with the use of technology  in ways  that cannot be delivered in the traditional model. This becomes a model for us not just for India, and India itself is a tremendous opportunity, but for us to actually solve many other parts of the world problems and need.

Last but not the least, the financial infrastructure, we talk about and I know minister Naidu got this question at one of the other forums about the funding for the smart cities or building of infrastructure.  I don’t think anybody has major pots of money that can just be allocated. This will have to generate, it will have to self-sustain. Again this is a scenario of public-private partnership. When I look at the United States, the United States started issuing municipal bonds over a century ago. One of my colleagues recently educated and reminded us 55 percent of the US municipal Bonds are held by individuals, by households. So there is again a tremendous possibility for us with the savings propensity in India, that with the government already doing the kinds of things that they are doing with the financial inclusion area with some level of statutory and regulatory support. Getting areas like municipal bonds become an avenue and then there are private green bonds for sustainable energy, sustainable water, and different areas which actually become other feeding mechanisms. Again can we have tools? When I look at some of the financial inclusion since my topic really was technology. When we look at the work we are doing with one of our clients Janlaxmi Financial services where it is about credit for the unbanked, urban unbanked who are an essential part of the smarter city infrastructure you know logistical understanding of credit rating. We are looking at analytics with digitization at source using mobile to find ways of taking financial capability to them because most of them cannot leave their stores or their side box alone to come for the financial inclusion in the banks.

So as we address the topic of smarter cities, I think it becomes important for us to both continue our interactions with the government during different forums and the policies that they have already got started, I think they give us a great way to launch the whole initiative that is not just about cities but really brings rural in. One final example, when we look at India, again I talked about the scale of demand and scale of supply. You have a hundred million Indian farmers, you have 10 million retail outlets and it’s about in the USA the infrastructure which the highways the FMs were built to connect farms to market. Today India has the opportunity to build our farm to market using both physical as well as digital infrastructures. This again will make us unique and we will do it in a scale that is unprecedented. There are already many opportunities with mobile apps and other again as I said the whole reviewing of the supply chain.

The recent GST bill is again a huge transformation initiative as well because it will allow companies to revisit how they manage and set up their supply chains but along with this if we are able to put in other structural things in combination with the government as they build out physical infrastructure in some cases, I think it gives us capabilities whether it is in the area of agro, health, education, energy, technology to actually build multiple centers of excellence based right here which both serve our needs, leap frog us and allow us to set up solutions at price points that can be unparalleled. So the future is bright but it requires some level of coordination, planning and structure and constant dialogue and taking this one step at a time. I don’t believe that we will all move into shiny cities new. It’s greenfield and brownfield and it’s bringing rural and urban together and our youth and qualifying them as we make them shiny, so thank you for letting me share a few of my thoughts this morning and thank you all for being a good audience.”