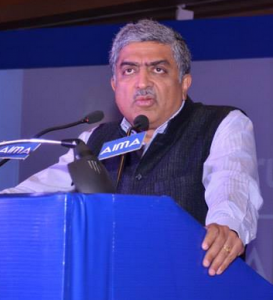 It’s really great to be here at AIMA and speak on Digital Governance. I’ll just spend a little bit of time talking about why it is so essential and what are the challenges & pitfalls and what we can do about it. I think digital governance is transforming governance through technology is really no longer a choice as it’s really a non-negotiable thing.  Because I sincerely believe that if we’re going to tackle the challenges of India’s public issues, challenges of inclusion,  challenges in health care, education &infrastructure you really can’t do that without using technology in a very big way and I mean information technology.

I think we’re particularly well-placed because we are seeing a huge trend in the last four to five years which actually makes it feasible for us to think of bringing technology to every person in the country. As we are seeing ubiquitous connectivity and in the country, we already have mobile connectivity touching 90% for the population and now with the Internet 2G, 3G, 4G & wifi, all these new technologies it’s reasonable to assume that everybody will be connected in some sense to others.

The government itself is laying a huge plan to build could be the fiber optic network to every gram panchayat. So  with all these investments in wireless & fiber connectivity,  it’s safe to assume that over the next few years everybody will possible for everyone to be on the grid because they’ll be connected in some way and connect-able in the sense of using the internet, so it’s really about data connectivity.

The second thing is the huge explosion in smarter and cheaper devices.  Today mobile phones smartphones are becoming much cheaper, much more powerful. We have phones coming for a very low prices.it’s reasonable to expect that everybody will have some kind of a device, it can be a feature phone, if not a smartphone.

One of the other things which is happening is as the cost of public expenditure on entitlement & subsidies goes up and the cost of technology goes down then we have a potential that there the cost of equipping everybody with the technology infrastructure is much lower than the money we spend on our entitlements.

The second important thing is that we give empowerment. Empowerment will happen for many reasons but long-term empowerment comes because of choice. For ex. What we saw in the market is that when the market did not have choice then the bargaining power was with the supplier & if you think of pre-liberalization India, markets did not have choices because you could only choose one telephone vendor, you can only choose one airline ticket &therefore the bargaining power was with the supplier.

What markets did to our economy was that it transferred the bargaining power from the supplier to the customer. The moment the customer had a choice to buy any brand of telephone or any other device, then the customer became the king, he became important, he became somebody who would make his choices.

Now what has happened in India is that while markets gave choices to people those who had purchasing power. We really haven’t done the same empowerment in public services. If you are taken example what’s happening in the public distribution system, the way the PDS works is that there are 500 thousand outlets & a customer or a beneficiary of the public service who is entitled to say some cheap price, he can only go to one shop to get his rice or wheat. He does not have a choice. So every shop has the list of 400 wheat/rice categories, so there are captive customers to one shop, so the customer is subservient to that shop. Therefore if the shop is closed, if the shop does not have enough quantity, the shop adulterates then the customer can’t do much about it.

So, just like markets gave choices to those who have purchasing power, technology will give choice to those who are on been depending on government beneficiaries.  In other words, if I can go to any PDA shop to withdraw my wheat/rice then the bargaining power shifts from the shopkeeper to the customer and that’s what we think technology will do because once we create an online identity like Aadhar and once that identity can be verified anywhere on the cloud then and that is equipped with all the shops then I can go to any shop to get my supplies and that automatically empowers me to choose and if any particular PDA shop does not give me good service then I can go to any other PDA shop. So, on the whole the whole equation can change and we can begin some internal competition among government services using technology.

We have about 20,000 Aadhar enabled micro ATMs where people can go to withdraw the money whenever they want. This is about enabling and empowering everyone through technology for more convenience. Here’s another example where what we have done is the I Aadhar enabled bank account opening. Now in a typical bank account opening a person should have an identity card and then he has to go to a branch which is forty kilometers away and then he has to coordinate with the agent for the paperwork.

But to open a bank account today we take something like fifteen days, provided he has all the documentation. Now, we have launched Aaadhar enabled online bank account opening. Using this matter to a person an open a bank account in two minutes. So, through this we have been able to crunch the cycle time of provisioning from fifteen days to two minutes.  So imagine if you can do that to all services from opening a bank account to getting an insurance policy. If everything can be made into automated real-time electronic transaction, then suddenly you make it extremely convenient for the customer and you expand the market for everybody, because finally inclusion is about getting everybody into the system and therefore I think we can bring in that kind of convenience.

So I do believe that the whole Digital government’sis a non-negotiable think it’s not about whether you want to do to do it or not, but it is really about how do you do it in the most a strategic manner to address issues of convenience of choice, issue of reducing cost etc. Cost reduction is so important because if you if it’s a high-cost delivery system then obviously we cannot participate, The only way we can make it low cost is by making electronic and people less.

Also I think issues of data security and privacy are important issues but all over the world as we go more and more towards an online world, the issues are being tackled not just for government applications but other applications too.  So I’m confident that all these issues will be sorted out.

How do we bring the change in the system and that’s actually most probably the most difficult part because the implementation of technology based solutions will have huge implications because they change the discretionary powers of for individuals and therefore that could be resisted &they remove monopolies and create competitive pressures so that could be resisted. This makes systems transparent and accountable.  So, we have a whole number of reasons to bring in technology.

So I think that a lot of things which we have to do in terms of change management in getting these things across.  Let’s say that you want to optimize the sale of natural resources &want to make sure that the whole process of these resources being sold is done in a streamline& accountable manner. Now the ideal way to do that would be to create an auctioning utility by a company or an organization that knows all about how to auction resources because the concept of auctioning are all the same.

But that will require that auctioning capabilities should not be embedded in each of the ministry’s but with the central utility which everybody uses and that leads to issues of changing the power to the people and so forth.  So I think that’s where the challenge is going to be in the change management and that obviously require a huge amount of clear will to make that happen.

The big thing about government projects is that you need to have clear accountability, clear leadership. Even in the US, with the whole Obama care website faced huge amount of challenges and I think if you’re not careful if we take up very ambitious transformation agendas but if we don’t have the leadership or autonomy to get it done then it’s unlikely that it will happen. Along with the chain management part, I think creating the organizations and institutions which can make change it happen in a very focused manner is very important.

I was very fortunate that when they give me the Aadhar project to do, I was given a complete mandate, I was given complete I’ll you know freedom to execute it.  I got the support from the government and today the fact is that in less than five years we already have about 58 crore Aadhar numbers. Whatsapp has 415 million users in five years, we have 580 million users in same time. So, it’s not bad.

It’s not just about identity but about uniqueness as it’s very important to remove duplicates from our data bases.

So, I think we have basically laid the foundation for a major transformation not the way we conduct thing so I’m absolutely convinced that India’s largest and most intractable problems can be solved with technology.I think the real push is going to be able to make it workout to strategize how to architect &how to grab the chain management process and bring in change very rapidly so that the people up in get benefit.

The above article is an excerpt from the speech delivered by Mr Nandan Nilekani, Chairman, UIDAI at AIMA’s 58th Foundation Day which took place in February 2014.