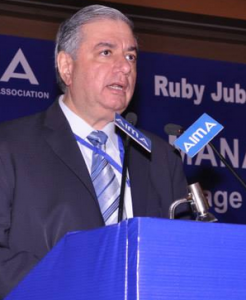 Ladies and gentlemen, a very good morning! A few years back when the last financial meltdown took place, the Advertising Agencies Association of India had a seminar in Mumbai, and I would like to repeat the name of that seminar because I think it fits in with what we are going through at this point of time. It is – ‘Why Waste a Good Recession’ and a lot of us laughed at it and thought they were being too clever but what we found is that those companies who leveraged to good recession actually did well and those companies who panicked and who did the traditional stuff, which Mr. Bajaj also talked about, didn’t perhaps do so well.

One of the issues raised in the brief up of this particular recession was, ‘is it worth while changing vision, is it worthwhile changing strategy during times of uncertainties and difficulties? And if you were to look at various examples of companies around the world, what we find is that those companies who stick to a vision and whose strategies are robust and whose strategies actually work across time, never actually change their strategies. What does certainly happen is that they change tactics, they change logistics, they change supply chain possibilities but in the long run, strategies are very very rarely changed. But the issue is what short term is & what is long term?

But above all else most successful organisations do one thing, which is perhaps a bit different, they tend to gain and plan for recession and difficult times well in advance. A lot of these games can be called corporate forecasting, can be called long term planning or you can say ‘pie in the sky’, whatever you can say. But the reality is that organisation though actually have game them in advance and have worked out a strategy of handling problems, locked it up in a safe and brought it out and dusted when situations actually happen have done far better, far more successful than companies who start thinking about how to do when problems actually hit the economy rather than having decided what to do in advance and therefore they have a distinct advantage over their competitors and people in other businesses.

When it comes to difficult times or recessionary times, the first thing the most people do is that they decide to cut costs and when we talk about cutting costs, first thing most people do is that they stop flying in business class and instead opt for economy class, have conferences rather than travel, and recruit at absolute emergencies only, so on. At the end of it, it’s great leadership, it shows that you are leading from the front with actual impact in terms of bottom line is next to nothing.

However, there is another view and option that some successful companies have taken which is ‘can we spend our way out of the recession or difficulties’. And when I am talking about spending, I am not talking about spending unnecessarily. But, if we were to invest in capital goods or plant and machinery which take a lot of time to actually set up, if we were to invest in new factories, or invest in advertising and promotion of our brands.

In times of uncertainty and difficulties, you will find that most organisations worldwide and certainly in this country who have actually spent the way out of the recession, have done a lot better than those companies who have pulled back, panicked, gone to the shelves and actually in the long run haven’t done so well. Take a simple example of recruitment.

Recessionary times, difficult times are probably the best time to recruit new talent because new talent is actually available. We talk about people leaving organisations but a lot of successful companies, most of which are represented in this room, actually recruit to a very large extent and have been recruiting right just now rather than stopping recruitment because at this very time you are actually able to get a damn good deal as far as the people are concerned.

Mr. Bajaj just talked about trying to be different rather than trying to imitate people. Here, I would like to give an example of what we have been through in the last 10 years in trying to set up our FMCG businesses. Every single time we stood up, which in blind form or in branded form was tested, was better than competition and was the best product in the market place in terms of quality and everything, every single time we did that, we fell flat on our faces and failed. We have been lucky our failure rates have not been 90%, it has been a lot less. Nevertheless, it’s a reality.

But every single time we came out with a product, which was different, and that differentiation meant something meaning to consumers and we were able to communicate this meaningful differentiation to consumers, we had very large success in our hands. We produce the best glucose biscuits in the country. But then we created new categories for ourselves in a lot of our FMCG spaces when nobody else was actually there. Creation of categories, some are mind set categories, some are physical product categories and every single categories have actually done well and surprise-surprise!

They are all recession proof. But the commoditised categories, whenever a lean time came, actually started declining. We created a portfolio category in every single category we decided to go into. And the reason was simple! We were new, we were idiots, and we were not sure what we were doing. We were just playing safe! But the consequence of playing safe and creating portfolio, what we realised was we were able to hold consumers within our brands, hold them within the range of ITC products. Consequence of that, we have been over the last 10 years and I hope continue to be fastest growing FMCG company in this country.

Thank you very much.

The above article is an excerpt from the speech delivered by Mr. Kurush Grant, Executive Director, ITC Ltd at AIMA’s National Management Convention which was held in September 2013.