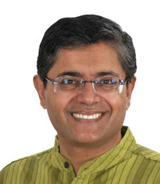 I have been in Parliament for 6 years now and in the first 6 months that I was in Parliament I often was tempted to quit as the frustration gets to you because the things do not change as quickly as you would wanted to. That’s a reality, that’s part of democracy that we live in. I will touch a little bit more about democracy as I will go along but the reality is things don’t change. But one decision I made then was either I could be a wishful thinker or to decide to deal with the reality of the situation which is that things don’t change easily and in politics to bring about change is not easy and to try to make difference from within the system and that’s what I have tried to do.

I often get confronted as to whether democracy is truly good for India or not. I have used a phrase in parliament that I would like to share with you for you to mull over and the phrase is ‘democracy tax’. We pay many taxes – sales, custom, income tax, are we also paying democracy tax? You could actually argue that yes we are from many points of view that decision making in our country is so slow that it costs us many years in effort to bring people out of poverty. The comparison often is made to China which does not have a democracy and my own experience is that yes we are paying democracy tax.

Subsequently I would touch whether this democracy tax is worthwhile or not? I have been on the energy committee and we brought out a new electricity act 2 years ago, which replaced about 100 years of different electricity legislation which was outdated. Some of it dating from 1910, 1948, 1993 all of that together and it took us 3 years because we had these public hearings in the parliamentary standing committee for energy and it actually involved 1000s of hours of depositions from experts, from consumers, from investors, from state governments, from trade unions, from media and in China a major change of policy would have taken 3 weeks perhaps, certainly not 3 years which is how much time it took us to bring about that change. All this costs time and money.

Let’s take the issue of corruption. ‘Transparency International’ one of the premier NGOs world wide which monitors corruption shows that we are making small gradual progress. Not big leaps of progress but small slow gradual progress and this is actually borne out from real life.

You don’t have to follow the chief vigilance commissioner’s website to find out how much corruption is there. If you go by the newspaper’s report you will think that there is much more corruption today than there was 10 years ago. The fact is if you stand back and take a look at the evidence you will see that with economic progress we are actually beginning to deal with corruption, the reality is that corruption has always been there, it has been hidden against the carpet.

I will give you simple example, take phones today. Today cell phones are everywhere. This has been made possible by liberalization, by competition, by both public sector and private sector having a free hand to operate, this is called economic freedom. I want to ask a question, when was the last time you paid a bribe to get phone connection? You go back as recently as 5-10 years ago it was routine to pay bribe to get a phone connection. Now today this generation and all generations after you will not think it is normal to pay bribe for phone connection. Today it would be considered extremely abnormal and unusual and I hope that is the trend in which we are going to move with more economic freedom with more competition in the economy from both private and public players. I am hopeful that things which corruption affects on day to day level, our lives on day to day level will gradually decrease.

This is not a formula for getting rid of corruption everywhere from top to bottom. For that we have institutions, we have election commission, chief vigilance commission and many others but economic freedom has a meaning greater than economic freedom itself, which is winds about social change of the type that I just talked about. I forgot to mention that democracy is not just better because we have slightly improving conditions on corruption front. Since I mentioned earlier that we are often compared to China, I want to point out that while China has seen a lot more progress than us, they also started liberalizing 12 years before us. They had a head start but two facts also point out that perhaps democracy is better in two other areas. One is China has something like 74,000 riots a year. These are officially recorded, though not often publicized. Just imagine if India were to have 74,000 riots a year it would be the breakdown of this country. We don’t.

Democracy provides us avenues for expressing ourselves and when I say ourselves I don’t mean people like me and you, I mean many vast millions of underprivileged people. In China people don’t have the freedom to move in a city like Beijing because they have residency passes, limiting them to where they can stay and where they can’t stay.

One final thing about democracy is that there is evidence that although China is far ahead of us in economic development because of the last 20 years of progress they have made, Indian companies are turning out to be more world beater companies than Chinese companies. Chinese companies are more successful because some foreign companies that are very large, operating in China; we have that also in India – Fords and others have come to India but the heartwarming thing is that Indian companies not just in software also in pharmaceuticals, manufacturing and many other sectors are becoming world beater in their own industries and they are now expanding outside of India, they are now buying up companies outside of India and expanding. So perhaps democracy if you give it time, if you have the patience to allow it to provide economic freedom as well as democratic freedom and also give us overall freedom that I am talking about.

I am saying there has never been a better time to live in India and this is not just me speaking. I have lived abroad, I have lived in India. I have been through the frustrations of living in India and today if I step back and look at the broader picture of what has happened in the last 10 years, what is likely to happen in the next 10 years I am very optimistic.

Mr BJ Panda, Then member of Parliament. This is an excerpt from Mr BJ Panda’s speech during AIMA’s Shaping Young Minds Programme held in June 2006 at Kolkatta.

19 thoughts on “The Indian Democracy – B J Panda, Former Member of Parliament”