AIMA organized its 14th HRM National Summit on 1st December 2016 at New Delhi. The Summit featured some of the top HR professionals and delegates from Industry, Government, Media, and Academia. Over 250 professionals from across India participated in the Summit.

Below is an excerpt from a very informative speech by Mr. TV Mohandas Pai, Sr. Vice President, AIMA and Chairperson, Manipal Global Education Services at 14th National HRM Summit on the topic ‘Jobs in the Era of Automation’. 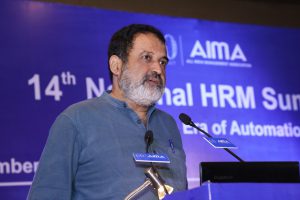 ” For the last many years AIMA has been holding the HR summit and every time we chose a cutting edge topic, primarily because we believe in the power of ideas. Ideas have moved civilizations, ideas have moved societies, and we believe at AIMA that we must be at the cutting edge with new ideas looking at what is happening in the world and that’s why we’ve chosen this very important topic – Jobs in Era of Automation.

Automation has been there for a pretty long period of time starting with the invention of the steam engine. Imagine the world before the machine was invented. The world was based upon labor, human muscle, and animal power. And the wealth of a nation depended upon the size of the population. So China and India, were the richest countries and the greatest countries in the world because they had very large population. And in the mid 18th century China-India made up to 45% of the world GDP and there was trade from Europe with the rest of the world. But then a very singular event happened in the Great Britain when the steam engine was invented and suddenly you could use kinetic energy for motive power and create the machine which could do the work of many human beings, particularly where there was heavy use of human or animal power. And it meant that the heavy work and heavy lifting suddenly could be done very differently, it could be repeated, it could be standardized, and that set off a chain of events which changed the face of civilization on the planet.