India has become a leading country in the world, but it still has some way to go before it can consider itself a truly great nation. India needs to reimagine itself as a nation without poverty and shortages and as a nation of capability and prosperity. NITI Aayog has to play a pivotal role in shaping the transformative policies and improving policy outcomes. 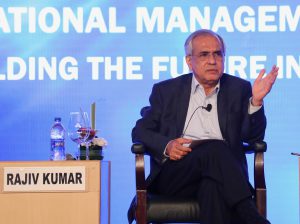 Let me start off by complimenting ourselves, as Indians, for being in the midst of what I’ve always called India’s historically unique attempt at undertaking a triple transition simultaneously. I don’t see anywhere else in history or geography that there are other countries that have taken the social, political, and economic transitions simultaneously, these have always been sequential, and that’s something we’ve had to do because of what we were and what our independent leaders of our national movement decided. They simply decided that India could not afford to first take the economic transition where all the liberties would be closed and there would be no democracies and so on, and Mr Ambedkar ensured that you couldn’t undertake an economic transition without the social transition. And if you look at this huge achievement that we have had over the last 70 years, we very often tend to underestimate that. The inversion of the social pyramid in our country, where you’ve had a Dalit woman being the chief minister of the largest province in our country thrice, has been achieved practically and democratically without any bloodshed or violence. And states after states from Tamil Nadu to Bihar to UP we’ve seen that social transition happens over the last 70 years which for example cost millions of lives in the Soviet Union and China, and is doing so in Africa at the moment.