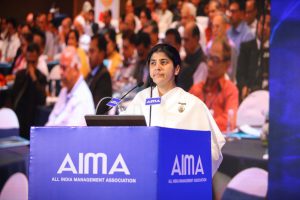 Last week in the Times of India, There was a proposal by the Government of Delhi saying that they want to introduce a subject called ‘Happiness’ in every Government school in Delhi, and they had asked proposals from NGOs and spiritual organisations to submit a curriculum that they would like to execute for school children in a subject called ‘happiness’. Most of us must have seen that page, but did we pause to reflect where are we heading? Our children have to have a subject called happiness because what they’re experiencing today is something different from happiness.

END_OF_DOCUMENT_TOKEN_TO_BE_REPLACED 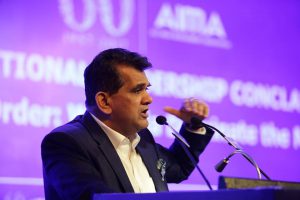 Amitabh Kant, CEO, NITI Aayog sharing his thoughts on Government and Business: What Should be the New Equation? at #AIMANLC

It’s great pleasure to be here on this very fascinating subject of government and business. My belief is that the government’s job is to lay down the policy framework and the private sector’s job is to create wealth in society and if you look at India over the years, the government had itself made India very complicated, very complex and a very difficult place to do business because over the years we have added a lots of rules, regulations, procedures, paper work, acts, all of them. And these procedures and paper works have made it very difficult for the private sector to create wealth and therefore this particular government in the last two and half years has attempted to make things extremely easy and simple. They have scrapped  1198 laws. This is unparalleled, unheard in India’s history so a lot of laws have been scrapped. It has tried to make India easy and simple for the private sector to do business. For instance, the number of forms for import and exports was 11 and 9 which has been brought down to a mere 3. You can register a company in one day today. You can register startup in just about an hour and MSME in just 5 minutes today. So the entire focus of this government has been to make India easy and simple, cut down paper work,  digitize everything and put everything online. And since most businesses are done in their state, the government’s view is that states become easy and simple and therefore we initiated the competition among states. We ranked states, we said we will name and shame states.States were ranked, a year before Gujarat came number one. But last year in the ease of doing business Gujarat was dethroned and Telangana and Andhra became number one. But the good part was that Jharkhand and Chattisgarh moved up. And they have done a lot of reforms. So similarly my view is that the government must create a huge sense of competition among the states and put it in public domain. And we are doing the same thing in education, in health, in water management from NITI AYOG on outcomes.