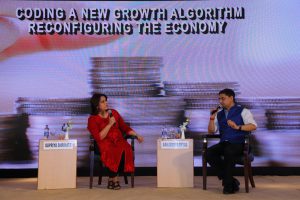 The world is seeing a potential trade war in the making, do you believe those fears are for real? Do you believe India will have to take sides on this one, we can’t be a mute spectator?

As far as taking sides is concerned, I’m very clear on whose side we are on. We’re on India’s side. Coming to the question of protectionism and the emerging global scenario. Let me be clear while indeed there are all kinds of protectionist tendencies popping up around the world, we in India remain committed to the globalized system, we are old experimenters in import substitution so our own history should more than adequately tell us that if we overdo import substitution or isolationist policies it always ends in tears. So while it is fair that occasionally you use some sorts of incentives to protect certain industries from dumping or maybe even do some protection for infant industries. Different countries have their own dynamics but in general we do need an open globalized system and in the end, we have to be willing to do deals with the rest of the world and the rest of the world has to be willing to do deals with us. But yes, the old system as it seems may have come to its grinding halt and let’s not blame the individual political leaders. My view is that the old system has come to a creaking halt at multiple levels. In the US there has been a simmering discontent about Chinese imports for a while, the fact of the matter is that it has come to a halt now.