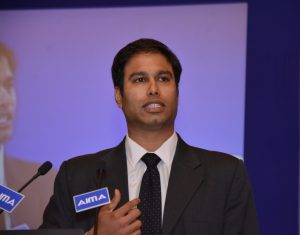 “Thank you so much for having me here. It’s an honor to be here among such distinguished panelists and an audience like this. I have been in technology for many decades now. I am very passionate about it and I think that it’s changing the way the world works. And I think fundamentally between the internet and social media that’s happening because there is some key ingredient that makes for economic success. Forrester calls this TERA – Trust, Efficiency, Relevance, and Access. Trust is about just being able to tap into the wisdom of the crowd so that you can talk to experts and layman and make an informed decision because you have a lot of information at your fingertips so there is a trust built into that so you are not having a biased opinion. Efficiency comes from just being able to search that and find the information very quickly. Relevance is about just finding the right information and increasingly as platforms are no more about you can actually tailor that content using bunch of fantastic apps come out around that. And then access is obviously about reach.

In India and globally we have billions of people on the internet and social media. So there is definitely scale but to me, the real beauty comes from the fact that this is democratized. It’s a level playing field where startups and large companies have pretty much the same advantage of getting this information and doing something about it and I would argue that right now given how agile startups are they actually have better shot at doing something with this information. So this is very exciting time.

We doubled our internet user base over the last three years. It took almost 13 years to go from 10 million to 100 million internet users and we doubled that in less than three years and that is an amazing sort of realization of the trajectory curve of technology adoption that is happening. We are now talking about India being second largest smartphone market in the world. I am not saying mobile. I am saying smart phone. A couple years ago we were talking mobile and that gives you the sense of how we need to leap frog and how India is leapfrogging. That maturity curve to go from offline to internet, to desktop to mobile took many years, in fact, decades in the developed market and we have done that much faster. I hope you guys believe the digital, technologies and internet have a role to play and I think it is going to help India make an even more pronounced impact on the global market scene. Now the trick is that we should not ape what’s going on elsewhere. Our problems, the market challenges you and I face here are very different than developed markets. Maybe other emerging markets have similar problems. But because of that, knowing that rather than just sort of copying I think this is where the fostering entrepreneurship, building these diverse communities which are sort of engaged-cum-full-fledged. That is what will help us. Think innovatively about old problems but think about them in new ways.

You look at apps like Uber which are fundamentally changing how transportation happens. Flipkart, Snapdeal have already changed how commerce happens in India and the story goes on. But to my final sort of framing point, I think that’s great. I have been really personally inspired to see the technology maturity, the adoption really picking up at a very different pace out of last couple years in India. But I think that’s only a minor part of the challenge. Technology is an enabler, it is not the answer. And I think to unlock our country’s full potential, we have to talk about the other part which is about the people.

We are about to become by the end of this decade the world’s youngest population in the world. India will single handily have almost 50 million skilled workers, that’s more than every other country on earth put together. So in this lies an amazing opportunity. We can actually be the talent hub to the world. But sadly when you compare the statistics, according to the India’s skill reports, 66 percent of our graduates are unemployable. And that’s shameful, that’s not acceptable. But 75 percent skills gap across the sector that we have. So there lot more work to be done. But I think that together we can actually scale that.

Why is this happening? I think there are three big drivers that cause for this skill gap. First is the matching problem. It’s connecting demand and supply in an efficient manner. So we had about 40 million people registered with the employment exchanges. Only 30 lakhs of those actually got placed. So if we can make matching happen more efficiently that’s part of the problem.  The second part of the problem is the mismatch problem. For people who are in the roles, they are not necessarily fully productive and so there is a little bit of retraining or tweaking that has to happen to get them fully productive. And I think that’s where we need to use technology to move beyond our traditional methods of teaching. So there will always be a place for classroom learning we need to make sure that the knowledge and the content that we disseminated is tailored and targeted for each individual.  And I think it also needs to be continuous so beyond the classroom you have to have on the job learning then the last piece is the pipeline problem. This goes to early years of education.  We have actually 11 million students that fall out this system because they fail their board exams and they never get back into either sort of higher education or into the workforce. That’s a problem. We have to actually fix and plug that leakage point and actually redesign our education system. I was reading a book which talks about how the right-brainers will rule the future. India has made some amazing left brainers. We know we are great engineers, we know all that stuff. Now we actually into compliment that and build a holistic full brain individuals. So the right brain thinking has to come to finishing. And I think technology has a meaningful role to play in this. And you are already seeing it with the portals like linda.com helping with a sort of on the job training or Coursera that’s happening but you know the trick is about connecting the dots. And that’s I think where the magic actually happens.

At LinkedIn, we are trying to build the world’s first economic graph. And I think on that platform there is going to be a tremendous amount of innovation which all of you will drive for us. So if you think what makes for an economy? You have professionals and workers who’re doing work. You have companies that employ these professionals and get them to solve certain business problems. You have jobs where each person is doing his or her task in relation to solving that broader business problem. And now to be good at that job you need the skills and the skills that you get are from universities.

So these are the big constituent parts of any economy and increasingly we have a bunch of those actually at scale. We have almost 350 million users, more than one in two professional in the world is on LinkedIn. You have billions of skill records. You have millions of jobs, millions of companies etc. So this is coming to scale and being able to connect these dots will allow us to do things differently. So for an example, Mr. Chandrababu Naidu is talking about making Andhra the logistics Hub of India and south Asia. Now, what can he as a government do to make sure that the Universities and what they are teaching are in line with what he would like? How does he make sure he attracts the right talent pool that exists today with respect to logistic expertise and brings them to Andhra? All of these kinds of problems are what’s possible when you start connecting these dots Primary education will open up new fields for us but for the workforce we have how can we actually open up their potential differently. How can we help them find the best-fit job that they have? So imagine that you are an engineer and you come and you do some you know some skill assessments online and you figure out what your competencies are.  It’s okay I could be an engineer, I could maybe be a pre-sales engineer or I could do something entirely different in business development. How can technology help make that informed choice for you to say ‘Hey you know actually you are really good at the communication, you are good at relationship building, you are okay at Java’. Maybe this pre-sales engineering path is something that helps combine this for you. Okay once you lock in on a path, can you actually figure out through something like this economic graph? Saying for this job what kinds of the companies are the right companies to target. What kind of skills am I going to need? Out of five skills, I need to be a great presales engineer. Maybe three I am good at but two, I need to develop. So who are the training providers or institutions or universities that I can go to get that from? Who are the mentors that I can actually look to who have gone on this journey before me? That’s where I think the technology is going to take us and the beauty this is not like something which is in the distant future, this is actually happening now. We are currently helping the city of New York, focus their attention on building talent, in-demand tech skills and we are kind of using some of this data and insights for New York, How do you bring that effusion.

in India we are building ecosystem to actually solve this problem of saying how can we re-imagine career centres, how can we re-imagine the career conversations and take you down the path that builds on your strength, your skills which are unique and individual to you rather than going into the factory where you are  forced into a particular piece. The really great news is that it is here and ultimately I think to me, beyond the technology and the people it is about the mindset and I think about four aspects of that mindset which is that we need continuity of learning in this new mindset. We need business models that support this entire concept. We need relevance which is tailored and personalized and we need agility. There is an amazing future ahead for us. Together we can  make India the talent capital of the world.”