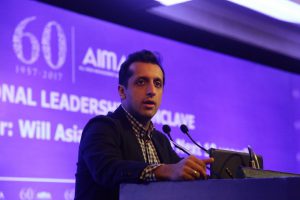 Hi everybody, it’s great to be here and particularly in a conference where we are not just talking about the data economy but I know the theme of the gathering is about Asia more generally and how we ought to be thinking about the next 10 years.

I am going to take a slightly different approach. What I want to talk about is that; we are existing in an economy that is increasingly data driven, where consumers are being asked to engage digitally and I think the question I would ask does it change how we as businesses, as nonprofits, as brands, as leaders interact with consumers and if so, how? And I guess what I’m going to suggest that in a data economy, creativity, storytelling, culture matter even more. So if you’re interested in reaching consumers in a noisy era where they are living on digital increasingly, where personalization is a turnkey service offered by vendors everywhere. I guess what I would poses and what I’m going to run through is the personality of your brand, the extent to which your product thinks about culture, behaves like a human and touches people emotively, emotionally matters even more in that economy. And so I’m going to run through five insights that I think might help guide how you think about going to market in this new world. And all of these issues, by the way, are particularly true in Asia and of course in India where I think consumers are in any case more likely to be moved by what I call culture storytelling and more.

Insight number one. I spent a lot of my career at Twitter. Most of the last five years as the India MD and then Asia and Middle East VP. One of the biggest takeaways from working at Twitter and we were at the intersection of digital and brands and marketing and storytelling, one of the biggest insights I had was the importance of thinking horizontally about your go to market, not vertically. What do I mean by that? All of us as leaders, as people in business and leadership and organizations are trained to think vertically We’re trained to think about offices, budgets, headcount, phones and fax machines and internet connections. That is how you go to market, right? Anyone that’s gone to business school, graduate school the way you go to market is how you are localizing your product. What does it look like in the marketplace? How many people are you hiring? Where are offices etc. My challenge to everyone in the audience in this new economy where consumers are more fickle and unpredictable is to think horizontally. Think creatively. Instead of entering markets with headcount, formal budget and people, enter with scouts with evangelists, with vendors, with advisors, with advisory boards, with various networks and tiers of partners that are much more cost effective and can do your bidding for you. Even at a company like Twitter where we spent a lot of time thinking about market entry within India and other markets in Asia, most of our market entry was actually very light. I was, for instance, the only Twitter employee in India the only guy from 2012 to 2014. Think about that the only guy in the whole country for 18 months. Now that may come across as a rather silly approach to investing in the market but what I think it led to was it forced the company to think really strategically and creatively about leverage in the market so that we found agents in the country that went to market with us whether they were TV channels or government agencies or entertainment institutions or other technology and third party products that essentially saw themselves as part of our mission. So my first message to you all in this economy is to think horizontally, think flat. Don’t think vertical.

Insight number two. A gentleman named George Hagel came up with the word zeitgeist two century ago. zeitgeist is a German word, a German phrase that is loosely translated as ‘sprit of the times’. Every country, every city, every room has a zeitgeist, meaning a set of topics that are in our shared consciousness. In India, at the Nukkad, What are people talking about? You know one of the things that certainly been the zeitgeist of India the last few months is of course been demonetization. You go to another country and it’s a different topic. Every community has its own zeitgeist, the spirit of the times. What are people talking about? What is topical? What is in consumer consciousness? And my challenge to you all in a data economy where we all may be obsessing over big data is don’t forget about zeitgeist. In India in particular and in Asia especially, the extent to which your products have successfully immersed in the zeitgeist and it has become a part of the culture is a big determinant factor I would argue in the extent to which you scale. While of course marketing budgets and product and the extent to which you’re relying on big data matter, I think zeitgeist matters as well. The folks from Pepsi have done an outstanding job in recent years ensuring they’re a part of the zeitgeist for instance of a young India, right? And I think it’s important to think of yourselves as a media company. If all of your companies have the word productions attached afterward. Think of the name of your company and add the word productions. All of a sudden your storytelling company, right? What stories would you tell, what podcasts would you host, and what videos would you produce. How would you think of zeitgeist?

Insight number three is the importance of government. You know one of the things that we forget in this data economy of course government in many ways in India has been driving and instigating some of this. But the government is an extraordinary partner, a potential partner. A government is not just an agent to keep away from a regulatory standpoint. It is not just a sales channel or a place to do a few public-private partnerships. A government is all of the above. A government is a place where I have observed, you have a massive opportunity to experiment with a product, scale up product, scale up the credibility of your products. Get some blessings you may need. And maybe even understand and develop a point of view on data and some of the issues. But I would encourage all of us to run towards government and think about the role government can play in the scale of our products and technologies and not be afraid to make the shift from consumer to b2b. All of us want to run the next big consumer company because there’s a halo effect that comes from running big consumer iconic brands like a Pepsi. But sometimes our best opportunities for success in this economy come from an enterprise angle, selling to the enterprise and it’s something I certainly have learned in my career.

Insight number four is one of the things we forget as we analyze markets in this economy that is so changing before our eyes, is that these markets are not static, meaning that when you’re assessing a market and its revenue potential, revenue potential is always a moving target and consumer tastes is  a moving target and so while it may not make sense to tackle India or corner of India today because of monetization potential, it’s important to make those first impressions. I have observed that first impressions matter with the consumers of today even if they may not be as monetizable. You know the Indian iPhone user is much more monetizable than the Indian Android user today. But that doesn’t mean you don’t aim at the Indian Android user and make that first impression so that when your product is at a level of scale, you have an opportunity to monetize.

Insight number five – A friend of mine from Stanford has written this book and it’s called “the Fuzzy and the Techie”. If you go to Stanford you’re one of two things. You’re either a fuzzy meaning you’ve studied history and music and the humanities and philosophy or you’re a techie meaning you’re an engineer. It’s kind of part of the culture of Stanford where you are one or the other and my friend Scott Hartley has written a book called the “fuzzy techie”. How actually the interplay of these two skills or how you will win in this data economy. It’s philosophy major who starts a digital app. It’s the musician who thinks about the role of technology and billing. I think in India we ought to be doing more and in business and leadership and organizations to emphasize the importance of this married skill set. Anand Mahindra at a conference recently a month ago said this in response to a question “Will technology save the world?” he said, “No, it will be poets, writers, and musicians”. I myself studied history in college and so one of the things I would encourage all of us, right. As we think about well how do we do all this? What people do we need is, find in India folks who are of the humanities and bring them closer to data and technology and I think what you’ll find is break out innovation in the brands use these tools and technologies and data etc. Don’t diminish the importance of these skills and it’s certainly something that I’ve taken to heart in my various leadership opportunities in India and elsewhere. The business I now run, we call it Times Global. It is Bennett Coleman’s leading investment vehicle for global big ideas from around the world that want to come to India. We help big ideas around the world from Vice and Uber, Coursera and Airbnb come to India and we try to bring out all these ideas I just talked about and help them and put them to practice in the market. So I hope this is a little bit of helpful. A different take on the topic and I look forward to any questions folks might have. Thank you very much.