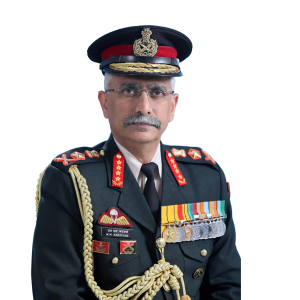 The past couple of years has been tough for India on multiple fronts. Not only has the county suffered due to the pandemic but has also faced threats on its borders from its neighbours. The standoff with China on the Himalayan Border has cooled off but is far from being resolved. Likewise, many other threats are complicating matters for India’s security.

Due to all these reasons, the Indian Army had to reinvent itself constantly to confront such threats. They had to prepare for securing India on a multi-border and multi-dimensional front with the turmoil of the pandemic reeling hard. Having served in various capacities in different parts of the Indian Army, and having been conferred with numerous medals for his distinguished services, including the Param Vishisht Sewa Medal, General M M Naravane, PVSM, AVSM, SM, VSM, ADC, Former Chief of the Army Staff, Indian Army talked about how the Indian Army had to adopt new warfare strategies and function fully yet efficiently, during the pandemic at AIMA’s 48th National Management Convention.

General M M Naravane started off the Session by saying that India underwent a Black Swan Event in the form of the pandemic. However, the Army took 2-3 steps ahead to prepare for the phenomenon. He said that forecasting and planning are the very essence of management. For the Indian Army, Force Protection and Force Preservation were the two main goals.

The Indian Army, therefore, was ready to meet all contingencies. The Indian Army prides itself as the Citizen Army committed to the security of the people. The Army also proactively contributed to the government’s efforts toward meeting challenges. Due to the strengthening of the medical infrastructure within the Army itself for battling Covid, the number of Covid cases within the Army was far below than the national average. This can be attributed to the highest standard of physical fitness and self-discipline of the Army, a testimony to the effectiveness of its junior leadership.

During the crisis, while schools, offices, factories and shopping malls were shut down, “security couldn’t be ceased”. The soldiers had to discharge their duties to protect the borders. They had full faith in the leaders and were willing to work through all the challenges and difficulties to achieve their objectives, that too within their given resources. And this was possible, as all the contingencies were war-gamed.

A National Army of mammoth size and coupled with the challenges of live and active borders only forced the Leadership to introspect and improve processes and reinvent the procedures. The Leadership only acknowledged how the power of technology can be harnessed and utilised at a time of crisis paving way for new strategies. With all inhibitions shed, the Army only became stronger as an organisation. The training academies and institutions remained fully functional due to them recalibrating their approach with reliance on digital platforms. Even physical activities with the required distancing that were practiced then, have now become part of the routine.

All the borders were given equal importance and not one went neglected. While the Senior Leadership conceived the plan, the execution was always left to the commanders on the ground.

In a conclusion to his address, General M M Naravane said that the nation holds the Army in high esteem and invests its trust in it. However, that is a huge responsibility to protect its interests and its citizens even during times of crisis, and the Army has to live up to the expectations. He said, “we can’t afford to fail as there are no runners up in war”. He also said that “as leaders, we take up our responsibility seriously and try to do our best”.