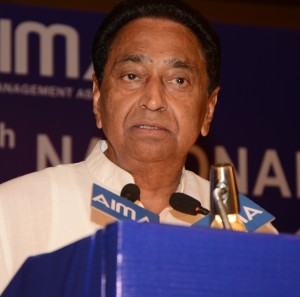 Good morning everyone. I’m delighted to be here amongst AIMA for the 40th National Management Convention and I would like to congratulate AIMA on its ruby jubilee of NMC.

Ruby jubilee seems to be a nice word. It has always been a pleasure to attend AIMA’s conventions. I have seen AIMA grow from strength to strength and I have attended many of their conventions as it evolved into a think tank and a hub of management development and education. Though it’s not easy for a purely voluntary, non lobbying organisation, to succeed, AIMA has won the respect and support of the management fraternity, academia and government through its efforts to build India’s management capacity. Once again, through this convention, AIMA is trying to explore the possible management responsive, prevailing uncertainty and this is indeed commendable. I would like to congratulate Ms. Chanda Kochar & Mr. Aseem Premji, who have become legends in the lifetime of stupendous achievements. You have not only led corporative institutions but have made several contributions to the brand India. Your work is an inspiration to the new generation of Indian entrepreneurs and executives. Mr. Gopalakrishanan, you are a visionary of the TATA Group and a wonderful writer. I would like to congratulate the award winners as well.

Even as we celebrate achievements, we are aware of the global economic scenario that envelops us. As I was listening to Mr. Shiv Kumar, who was talking of life spans, I noticed he missed out talking about the life spans of governments and politicians. So, that is also undergoing a change and politicians are finding it very difficult to get re-elected. So, people are expecting much more of governments and we are seeing a very great change taking place in the Indian political landscape which is important. We have seen this change every decade.

Ever since the financial crisis hit economies across the globe in 2008, the world had been facing an uncertain economic environment, what originated as the bursting of the real estate bubble that led to the exposing of fantasy finance, fantasy finance in Europe and in the United States. I repeatedly use the word fantasy finance with bankers should really adopt this phrase that’s exactly what happened. We live in a globalised world and as India’s engagement with the global economy has grown, whatever happens does impact India and emerging markets in particular. Slowdown in demand, volatile capital inflows by one account in the decade before 2008, 70% of the capital from Europe was exported. This 70% went to United States, North America, South America, Asia, Africa, and wherever. 70% of the capital used to be exported.

One does not know in uncertainty, what the next decade hold, with Europe still needing structural adjustments and structural reforms. That is one of the challenges and one of the things; I think one of the most uncertain things is the future of Europe. How will they be able to make these structural changes? It’s just not balancing; not dealing with deficits but those deficits can only be addressed by structural changes and those structural changes are going to be the challenge of the future. Well, in India, the growth rate came down by 5% due to a combination of these factors, global factors and obviously domestic constraints, the Indian economy did grow at an average of 8% .The economic fundamentals still remain strong. This is an important thing to know.

The recent depreciation of the Indian Rupee has caused a great anxiety amongst the investors. This is an example of how the changes in the macro-economic environment have affected us adversely. The US Federal Reserve indicated plans to reduce the liquidity injections over the next year or so and the Rupee went down along with the other emerging markets, it plunged sharply. More recently, the US fed failed to implement these actions, as early as expected, leading to a huge reversal in capital flows and the recovery in the value of the rupee. Well in India, the twin deficits- the current account and the fiscal deficit, have been a cause for concern. We are containing it; we are targeting 3% in the year 2016-17. But again balancing it between social expenditure becomes a big challenge. We must not forget that we are still close to 300 million people less than one Dollar a day and the glitter of many things sometimes overpowers this 300 million one dollar a day. And reserve bank is taking steps, which all of you are aware of.

International oil price again is a big uncertainty. What happens in the global arena may impact and do impact global oil prices and we have tried to address that by increases prices, not a very good thing political as it’s not easy to raise prices but that is again one of the challenges of government. FDI reforms, we have taken steps and we will continue to take steps but we must remember India’s success of reforms started off in 1991, when India had calibrated reforms. We had no model to follow. We are not following the central or North American models; we are not following south-east models or the Asian models. We are following the Indian model and the Indian model has been calibrated reforms. And if calibrated reforms have led to this, we will continue with our reforms. And I think we have done a lot. India remains one of the most open countries. If you look at some European countries in terms of investment regulations, you will see India is far more liberal, far more open. We want this because we are looking for greater inflows and the good news is during April to July, India received 7.1 billion in FDI which is 20% higher than the previous year. We are also making efforts to see the procedure more transparent and being clarity to the tax within.

The cabinet committee for investments was formed which is looking for delayed projects and when I sit in these meetings, I see that why things don’t move sometimes for 2 years which could simply be solved. But it is because sometimes we don’t have the ability, or the experience to do it. So, it just keeps going round and round. And when we sit for it we don’t know if it’s the right thing. But the basic point is, that we need to know what we are addressing and I think that’s the most important thing, which is there. Of course, growth has to be inclusive. I have been talking about the growth to be inclusive since the last 10-12 years because the challenge of growth in India is that it’s just not achieving growth, it’s just managing growth and when we talk about managing growth, we need to be talking of inclusive growth. How do we make growth touch all sections of society and all parts of the country? When we look at the north-east and some of the parts of this country, the districts of the country, we can certainly see that growth has not been inclusive. What does the 5%, 8%, and 9% GDP means to the people of the districts?

When I was commerce minister we did the calculation of what does 8% growth means to the different kinds of people. What it means to the textile industry or the auto industry and we came to some very interesting findings. One of the findings was that 8% growth meant that 23 million people would move from having one meal a day to 2 meals a day and so many more million people will move from 2 meals a day to a better 2 meals a day. Now what does that mean? That means how do we have better infrastructure?

These are the challenges we need to be addressing as these things have a different meaning for different sectors and different people. Certainly, the government could do more and is trying to but I don’t think government’s courage and ability alone could end uncertainty, unless the stakeholders also respond positively with courage. Those present in the audience also, I think, have a great role to play. Your courage and initiative is vital for the revival of the economy.

I thank AIMA for inviting me again and I congratulate the association once more for the ruby jubilee of the NMC. Thank you.

The above article is an excerpt from the speech delivered by Mr Kamal Nath,  Minister of Urban Development  at AIMA’s National Management Convention which was held in September 2013.