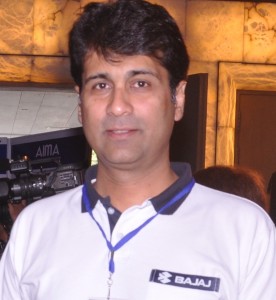 Good morning everyone. This is perhaps the third or fourth time AIMA has invited me to speak and I don’t know why they have called me up again but I’ll tell you why I like coming here. Well, first of all, because Rekha is wonderful and also, Shiv, Gautam and Sanjiv and the others, you all are very nice and very warm and welcoming. But most of all and I say this from my heart, I find that this is the best audience to be with. I mean, there is always so much energy in this room.

The theme of the conference is ‘courage in uncertainty’ and when I was given the executive summary, this is what it said: facing the future and uncertainty with courage is not a way, but the only way. This is what I received from AIMA. Well, this in itself is not new. Aristotle said centuries ago, that courage is the first of all virtues because without it we cannot act on any other virtue. So, that has been acknowledged a long time back. But let me also share with you what a very well known doctor said, a very long time back, Dr. Michael Boyd. He said, “All that which is powerful for good is potent for evil”. It’s good to diet, but it’s not good to diet too much. It is good to exercise, but it’s not good to exercise too much. It’s good to work, but it’s not good to work too much. Therefore, all that is powerful for good is powerful for evil as well. So, courage, I think, is powerful for good but courage can also be very potent for evil, and that is why my presentation starts with a question- “courage is uncertainty?” What I mean to convey is that there is a lot of uncertainty that we find ourselves in, self inflicted, brought upon us by ourselves because we’re being too courageous, perhaps full hardy. So, what I’m going to do for the next few minutes is as Shahrukh said to all of us yesterday, he’s here less to talk about success and more about failure in the context of success.

I’m here to share with you my thoughts. To tell you less about what to do in my view, in my humble view and more about perhaps what not to do, as I have learnt from my own experiences. As per a study done by Ernst & Young, quoted out of a book called ‘The origin of brands’ by a very well known marketing strategist: “90% of all new products and services introduced worldwide failed.” Now you wouldn’t believe in a minister who fails 90% of the time, you wouldn’t send your children to a school whose students fail 90% of the time and you wouldn’t fly on an airline that didn’t take off or land properly 90% of the time. But as managers, we think it is our birth right to be wrong 90% of the time. So, this is the statistic.

The reason I titled this slide as “Culprit” is because sometimes I think this is a wonderful self-sustaining model. You go to places like Harvard Business School, they teach you some stuff, and then you go and manage some companies. But you fail 90% of the time, so you have to unlearn and go back to Harvard Business School, so they can teach you some more stuff. As a result it keeps there business going quiet well as business schools and business consultants. I have had my own experience at Bajaj. Since 1990, being a victim of many such theories or teachings or gyans, as we call it, I would like to share some of it with you.

When I finished engineering from the UK, I essentially studied ‘world class manufacturing’. The best known author at that time, or the expert of the subject was Richard Schonberger. By the time I joined Bajaj, few months later, the concept had already changed from ‘world class manufacturing’ to ‘just in time’. Everybody was talking about ‘just in time’. At that time, I had to work on the assembly line that used to manufacture scooters where I was trying to implement ‘Just in time’ as I understood it. But I was not able to as at that time, somebody told me ‘just in time’ is passing and now you have to talk about ‘core competence’. Thus, I bought a few books on ‘core competence’ and I started studying it. But then, the quality movement started. So Kaizen was on, then it went from QFD to TQM, then TFM to QDA.

Consequently, once again I was a student. I was not able to get out of the studying mode. Then how could I practice? Now when I was studying QFD and TQM, MIT came up with Lean and I thought if this is MIT then that’s the ultimate. So, I turned my attention to Lean but It was hijacked by   automation & robotics and then it was 6 sigma which was so complicated because it was so statistical and you go through it with blue belts, black belts and green belts and all that kind of stuffs. And then there were some very esoteric concepts like: managers need to go in blue oceans, wearing seven new hats and seven new habits, and stuff like that. I mean it got really complicated. In 20 years, I have been through 20, 30, 40 different theories and all kinds of wisdom that were put up by people and at the end of it I found myself quite confused. So, I do not recommend you any of these things.

Management needs to have some principles. There has to be some science in management. That stands the test of time. So that management can be repeatable. If you do the same thing again and again, even if in a different context, if the world around you has changed, the competition has changed, if something has changed inside of you, but you should be able to produce a positive result each time as much as we expect any professional in his field to do so and one of the principles that is found very useful for myself at my company was this that essentially do not serve a market, create your own market. Whether you are a marketing organisation, or an engineering organisation, whether you are doing products or services, we all have two fundamental options as managers.

We have the option to be a “Me Too” to try and take a slice out of an existing market somebody else has created and effectively run a commoditised business or we have the choice to differentiate ourselves to do something different, not to be intuitive but to be contra-intuitive. To say to oneself, that if there is a market out there of something and if I also try to participate and do so by aping the market leader and even if you do well, you will still be an ape. So it’s better to do something different, to do something which is in contrast to the market leaders, to create your own market, to differentiate yourself and as the reason Trout told us, not to try to sell but to try to supply a reason to buy and I think this strategy of not serving but creating your own market is the reason why in the times of uncertainty some companies continue to do well.

In the last 2 to 3 years, while we read about the pressures on the IT industry, we have also come across companies like TCS that does very well. While we read about the debacle in the aviation industry, we also read about Indigo that just goes from strength to strength every year. And while we read about difficulties of auto industry, we have companies like Royal Enfield, and finally say so Bajaj and Mahindra that do really very well. For that reason, I think in the same uncertain external environment, we can find the examples of success and I think the success is based on a certain kind of courage and specifically that courage is the courage to differentiate, to create your own identity, to have the conviction to stick to that and not to go with the tide, with the herd mentality of the tide.

Finally I close with the quote of Hippocrates, the father of modern medicine, who said “I want to know more about the person that has a disease and less about the disease that a person has.”

He said, I don’t want to know more and more about the problem, but I want to know who is this person who has the problem because as I have explained this before, two people breathing the same air, both don’t get swine flu, two people eating at the same restaurant, both don’t get upset stomach, two people playing squash, both don’t fall back. The guy who falls sick, or gets hurt, is the guy who has weakness inside of him. So the problem is not the virus outside or the food, the real problem is the problem of susceptibility, because he was susceptibility, because his vitality was low, he fell prey to something. In the same way, as Hippocrates is trying to understand the susceptibility of the human being that makes him susceptibility to a disease, I think our job is to understand what susceptibility in my organisation is? What makes my organisation susceptibility? And to fix that susceptibility from inside, we need to fix our strategies as some of the outstanding companies like TCS and Indigo have done. And if we do that with the courage to differentiate then i think we can wither any   uncertainty. So that is my message for all.

Thank you once again for having me here. Thank you.

The above article is an excerpt from the speech delivered by Mr Rajiv Bajaj, Managing Director, Bajaj Auto Ltd  at AIMA’s National Management Convention which was held in September 2013.