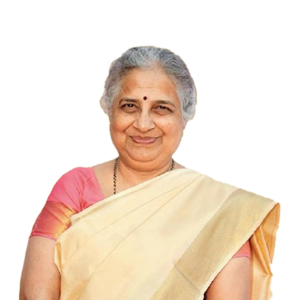 Philanthropy is about sharing things that you want to so that it gives you happiness. It could be about sharing your experiences, your ideas and affection, said Sudha Murty, Chairperson, Murty Foundation & Author and Social Worker, at AIMA’s 7th National Leadership Conclave.

A perfect epitome of wealth and compassion, Sudha Murthy’s outstanding work in the area of education, healthcare, equality of income creation, culture, and public hygiene has set new standards for the wealthy people of this country. In addition to that, her contribution to modern Indian literature in Kannada and English is commendable. A prolific writer who has authored 30+ books across all genres, one of the ‘original’ Angel Investors in India, and has received Awards for both Philanthropy and Writing. They say it is easier to give money than your time, and she does both efficiently and she was there to share a slice of her life with the audience at AIMA’s National Leadership Conclave.

As an opening note, Sudha Murty said that a lot of people mistake donating money for philanthropy but it is only one of the components of philanthropy. In Latin, philanthropy means- “Love of humanity”. You should love other human beings first, whether you have money or not, is secondary, she said. Besides that, you should give when needed; not money alone, but a hug, kind words, a pat on the back, and many other things.

Philanthropy is an Art of Science that advocates when to give, and how much to give, but more than that it is having compassion for other human beings. Another aspect of philanthropy is expecting back something in return after giving. Philanthropy is about sharing things that you want to so that it gives you happiness. It could be about sharing your experiences, your ideas, your affection. The Mantra for philanthropy should be- Vasudhaiva Kutumbakam (The World Is a One Family).

So, what was the inspiration for Sudha Murty to lead an austere life, a life of compassion and kindness? She said that she doesn’t come from a rich family and neither was she married to a rich man. She comes from a family of teachers, where her grandfather was a teacher, her father was a Doctor/Professor and her mother was a Teacher. Her family, however, believed in donating. Her grandfather used to grow rice and then donate and when she asked him why donate the best quality of rice? He said- ‘When you give, you should give with a good heart and also thank the receiver for giving you an opportunity to serve them”. Giving is the kindest act and you should pursue it irrespective of your wealth status. Even after she was married to Narayan Murty, he was jobless. But it was a matter of luck that he got a job. So, when she tried to find the meaning of philanthropy along with having created a business empire, she found out that it was actually to help others and she remains committed to the cause.

While being asked about her husband’s support in her plight, she quipped that “the Cheque Book was in her hands” She, however, said that he never interfered with her activities and they both knew that they don’t spend on themselves but the “other part of the society”.

So, how did she raise her children, with also inculcating humility in them? She said that she used to take her children to work and make them aware of the job she did. When they were in their teens she befriended them and shared her own life experiences with them, telling them that soon they’d go out in the world and make a life of their own She also taught them that they needed to think twice about what they would undertake. She never gave them anything on her own until they asked for it repeatedly, otherwise, they would not have understood the value of money. She also inculcated the habit of reading books in them saying that “books are never-failing friends in life”.

And finally, what was her message for the young generation? She said she would just like to tell them not to compare themselves with anyone, nor to compete with anyone else but themselves. If they are not good at certain things, they should try to improve themselves in it day-by-day. “Play well, study well, try to gain as much knowledge as possible and learn good values. That is the key to success” she ended by saying.