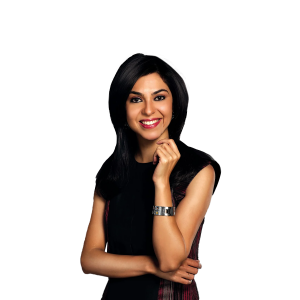 One of the most respected News Hosts and Anchors, and one who has always stayed on top of the game through sheer application and constant reinvention of oneself and the field of journalism, Ms. Shereen Bhan, Managing Editor, CNBC-TV18 has been hosting CNBC- TV 18’s ‘Indian Business Hour’ for more than a decade and the long-running show ‘Young Turks’ continues to draw large audiences even till today.

Ms. Shereen Bhan started off the session by saying that “there is a lot of privilege attached to where I come from, a privilege to be given the ability to make my choices”. Her father was a Fighter Pilot in the Indian Air Force and the thought of “equality opportunity’ was honed in her from the very beginning.

She came from a large extended family where merit, diligence, hard work and consistency were the things that drove the family. Since her family had to pack its bags and more every year, change was always a constant for her, and that is what gave her the understanding of being adaptable and agile in her formative years. She learned how to make the best use of the opportunities that came her way

Ms. Shereen Bhan also mentioned that she was lucky to be surrounded by very strong women. Her mother pushed her to always do better. Her grandmother was focused on good education for everybody at home. So, that kind of environment really shaped her to make the choices she wanted to but in a responsible way.

She has spent 22 years on CNBC and people ask her “how come you’re there for so long”, her answer to that was that “you have to love what you do and do what you love”. She said that her purpose and her passion have converged. Her purpose was to be a communicator; she wanted to do documentary filmmaking. She had a passion for news. She has been doing both and has not looked back since.

She fondly remembered an incident when she came for an interview on CNBC and was asked if she was interested in the news for the Indian diaspora. She said that she was and she then got a call from them asking if she wanted to consider anchoring. She agreed and got hired. That incident made her realise that you have to be serious about what you’re doing. She said that “the route to excellence is a daily improvement”.

Another question that she is often asked is “how is it that you keep going, what is the motivation for you?”. To answer that, she says that she has the “willingness” to do this job. And she wants to do this to the best of her ability and her potential. “That, for me is non-negotiable,” she said.

She also mentioned how her role kept changing every time she led CNBC. She also stressed the fact that “the role of the leader is not to come up with great ideas, the role of the leader is to come up with an environment where great ideas can happen”. She resonates with the thought and she wants to create and facilitate an environment in her team, where people feel empowered, they feel a sense of purpose and they feel that they’re equal custodians of this brand. And those are all the things that drive her.

Even during the pandemic, the team at CNBC re-established their purpose as everyone was feeling low, anxious and purposeless. That is when CNBC- Clutter Breakers, a special segment of business news reporting was created to enliven the mood of the organisation. It not only met the purpose, but also helped the channel connect with the audience.

Another piece of advice she had for the young professionals was to “listen” rather than ask. She also added that most often we agonise ourselves with the thought of uncertainty of the future, when we could invest the energy in doing something productive in the present. She also spoke about how prioritising what is important for us in life is key.