AIMA and Storm the Norm co-created ‘Insight Storm’ – a novel format to generate sharp insights delivered powerfully. The Inaugural InsightStorm was organized on 10th August 2016 at Hotel Taj Lands End, Mumbai. This edition of InsightStorm paired up thought leaders from two diverse fields – Art and Business and in a 30-minute session, they shared three pre-created insights around a theme, followed it up with a ‘collision dialogue’ and ended with one fresh insight each.

Below is an excerpt from the speech of Mr Kabir Bedi, Indian television and Film actor at Insight Storm. 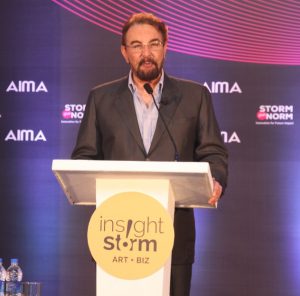 My first insight is that adversity can be your biggest motivator. The second thing is moving in one direction is fine. As you go along there are lots of things you do, efforts you make to try and get ahead and then there are things whether you call it luck or opportunity or coincidence, something happens and that’s an opportunity. Now opportunities are a very strange thing. It could be an offer somebody makes you which is quite obvious. It could be a conversation overheard at the bus stop. It could be a headline you read in a newspaper. The key is being able to recognize opportunity because as I said opportunity does not come with marching brass bands. And that ability to say ‘oh my god this could be a massive opportunity’ is something that needs to be acted on and to act on it, you need to be able to recognize your opportunity so that is my second insight, opportunities don’t come with marching brass bands.

Thirdly when you reach a level of success, you think ‘Ah! I have hit this one right, terrific’. It’s very important to see what else you can do.  Where else you can move from there because resting on your laurels can be dangerous. It can be stagnating, so for you to grow  and your vision to grow and your personal and your evolution to be complete beyond success, you have to look at what lies beyond that success and what else you can do. So my third insight is that success is not an end, there are other worlds to conquer.

Now there are stories behind these. You know coming back to the first insight which was adversity can be our biggest motivator. My family was a remarkable family, my parents were oxford educated, but they were very idealistic people; they fought for freedom of the country. After independence, they chose spiritual paths. So even though they were intellectually and culturally very rich, economically I won’t say they were poor but let’s say lower-middle class economically and as a result, I got my admission in St. Stephen’s College in Delhi but I had to pave my way. So I worked with the all India radio, television and that was really hard because you know you are studying in the day, getting to the all India radio and television just in the earliest days etc. and it was tiring.

One day while coming back from the radio station, I was sitting in an auto and as it was going along and it hit a real bad pothole and my head bang violently against the bar on top of the auto. And as I was in pain furiously I looked up and I saw a plane flying. I said to myself that one-day corporations will fly me across the world. That was the anger, that crash with the bar in the auto-generated, but also my motivation. As a result when I finished the college I came to the city where there were corporations which is Bombay, Mumbai today. And that in turn, led to my working with advertising where I worked for Ogilvy & Mather and also Lintas as the FM chief. So corporations did fly me across the world for that period of time, at least all across India. And then I moved over to the film world because I had done a play and  was very sort of in demand. I did a play called Tuglaq which was one of the most successful plays at that time. I got offers from films. I took them and entered the film industry but very quickly realized that unless I wanted to be a singing dancing star, I better think of other worlds to conquer because I wasn’t keen on singing and dancing.

So I entered the industry, I had one very big hit film kuchhe Dhaage with Raj Khosala directing and Vinod Khanna with me, signed for the film Nagin and then the Italians came to India looking for a character for Sandokan which was going to be lead of a television series of Italy and they had come on a tour of Asia, looking at 10 cities of Asia to find Sandokan and the first person they met in the first city they came, was me. And so they were not about to make any decision but they wanted a tall, athletic, preferably a bearded actor and that I was, fitting the bill and I was also  considered hot at that time in terms of the buzz in the industry and they said, “Will you come to Rome at your own expense to do a screen test?”. Now I could have said what nonsense, I am an established actor how you dare say at your expense? If you want to audition me, fly me. That would be a very natural reaction, especially given the kind of adulation that surrounds success but I said I will come, no problem.  So because I was able to recognize that this might be a life-changing opportunity and it was because that series went on to become the biggest hit on European television. Its TRP have not been matched till today. People remember me for that series till today. Every generation of Italy in Europe had seen that series . If I had some pride and ego and said noI would have lost it. So the important thing is learning to recognize opportunity when you see it and doing what it takes to follow through.

My third point is that success is not an end there are other words to conquer. When Sandokan became this incredible success for me that success actually became a trap. Because it broke all the records and made me a star in Europe. And I realized very quickly after talking to a few filmmakers that for all my success, Italy could not cast me in any other role. I was the quintessential iconic Sandokan and so if you make a nice social film and inbox Sandokan, it ruins your film. So success became a trap. I realized also that having reached this level of success; I couldn’t build on it further in Europe and what has remained? Either go back to India or push forward. So I went on to Hollywood and not that it was easy but I did have the kind of success that made me highly noticeable. Thief of Baghdad with Roddy McDowall, Ashanti with Michael Caine and William Holden and Omar Sharif, then the Bond film Octopussy , opposite Roger Moore where l played the villain and this led to my being invited to be a member of the academy of motion picture arts and sciences, the people that vote for the Oscars and then this leads again to many other honors that later I went on, many other miniseries, daytime and night time series like the bold and beautiful etc. which ran for over a year, second most popular series in the world.

But the fact is that the important thing was that I didn’t try and rest on my success, I pushed on. There are other worlds to conquer. And in Hollywood I certainly was a working actor, I mean have been Hollywood’s biggest star but at the end of the day, I established a career on three continents starting out of a Bollywood, going to Europe, Going to America.I certainly felt like a bit of a trailblazer because I was the first Indian that actually done that, going from Bollywood to make a career abroad and that actually was the greatest satisfaction of all. And so those are my basic three insights that I want to share with you – adversity can be the biggest motivator, opportunities don’t come marching with brass bands and success is not an end, there are the other worlds to conquer. Thankyou!