Below is an excerpt of the Q & A between Ms Supriya Shrinate, Chief Editor-News at ET NOW and Mr Santosh Desai, Managing Director & CEO of Futurebrands India Ltd, Author, Columnist, Social Commentator. 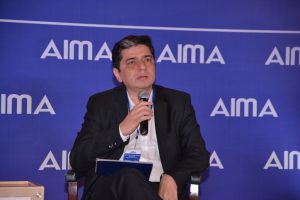 How has brand building changed in India and why are we so obsessed with disruption?

I think we live in a time where things are changing very fast and we have said this for a few decades now. You know there is a sense that things are changing but in the last seven or eight years, in particular, it’s not just the pace of change, It’s as if our foundational assumptions, the way we see the world itself has changed. And I think this creates a very interesting challenge at this particular point in time. I found the subject interesting, ‘indestructible brands: building brands to survive disruption’. Implicit in this articulation, It’s curious because there are certain assumptions that are built into this. It says building brands to survive disruption, not to create disruption. Brands are implicitly imagined as some sort of citadels, fortresses which do not create the new but which somehow must survive the new, which are not found in the source of change but they are under attack from change and they must protect themselves against disruption. This is very interesting. I just find this unconscious mental model of the brands as not being the source of change but being under threat. I also find it interesting that we are yearning for indestructibility. This idea that a brand is a permanent asset that you create once which stays for life and forever and forever, which survives attacks that marauders and invaders make on it and it stands there proud defined over millennia, this is an outdated idea. This yearning, this nostalgia for a permanent notion of a brand, It’s fundamentally at odds with the world that we live in.

I think to me this challenge in many ways is a defining challenge of our times. How do you imagine brands? We keep talking about digital. We keep talking about change but do we really embrace the meaning of that change? Do we really account for the fact that if indeed things are changing with that kind of speed then how we think of brands must necessarily change? Some of the implications I think of this kind of mindset would be that we look above all. Every time when we are creating a brand today, we are actually predicting the future. We are putting a stake in the ground and saying this is my imagination of the future. This is how I see the future and that take could be right, it could be wrong. It is scary at times, it is terrifying because earlier brands were the sum total of all possible strengths, physical capabilities. If you had more money, you could withstand you know attacks from other challengers. Today what drives the world fundamentally is ideas and imaginations. The biggest business ideas of the last decades are the ideas based on products of the imagination, not a product of infrastructure or hardware but the human imagination which is fluid, which changes. The earlier cementing notion for brands was the idea of loyalty. We wanted the customer and consumer to be loyal. Loyalty is a meaningless idea! it was meaningful at a time when the change happened at an incremental kind of way. Today change happens in waves. There are new waves of imaginations that come in and overwhelmed the past with newer ideas with the new ways of seeing the world. You know, in a world like this, the idea of loyalty has very little meaning in the way that we understood. Relevance it’s about only brands that do not resist change, that does not merely manage the change but that feed on change. It is those ideas that where change enables the brands, instead of change being imagined as a threat. How do you write this? It is the metaphor of surfing. It’s about flying a kite. You depend on change. You depend on movement to create energy, to create new ideas. You don’t fight it and to be that very fundamental level is the kind of shift that I think and the challenge that we see today.

Well, it depends on what you mean by fundamentals. So it’s always possible to argue it both ways. But if by fundamentals we mean that at the heart of every brand, there must be a compelling idea that must connect to a strong and in a very basic human need and an emotion and that brand must present itself in a ways which create a certain amount of predictability so that I know what to expect from a brand. I think at that level, the brand continues to be following similar principles. What has changed is the context. The fact that

And therefore it isn’t that sense that there will be a kind of marginal incremental change. You are not merely defeated by new competitors but by new ways of solving the problem. So it’s a completely different kind of a pattern that you are facing. So yes some fundamentals continue but the context is completely different.

Are marketers getting carried away by jargon, digital, social and local? Is this a reality that every marketer needs to learn and live with?

You know business depends on jargon. Business is fitted in jargon. Every trade needs its specialized language in order to feel special. Business needs it, Brands need it. But while that may be a universal phenomenon to dismiss this as a jargon or to say that just because you talk about something endlessly very often it’s a form of exorcism. You want to talk about it so that you don’t have to do anything about it. You are sort of trying to inoculate yourself from actually having to do anything about it by just endlessly talking about it. But in this case, you know whenever the fundamental and the dominant medium of the time changes, everything changes. Television changed everything in the world. It changed the nature of relationships with not just business, it changed the notion of desire, It made celebrities what they are. With the coming of the digital the society changes. The world changes. Anybody in business who does not look upon this as a really radical fundamental shift which will lead you to question everything that you do, I think would be living in a fool’s paradise. This is not jargon and there may be jargon attached to it. That is not to say that there is no jargon that it proliferates but at its heart, this is a real fundamental shift.

It is a challenge. We tend to look at the new in terms of the old and we always tell ourselves that things haven’t changed that much. Are the fundamentals same? Isn’t it actually the same world, wearing some new clothes? This reassurance that we constantly seek to provide ourselves saying that we are all right, we are not outdated, we still understand the world, Although it is increasingly incomprehensible to us.

I think the only way to deal with something that you don’t understand is first you get a crash course in it. You plunge into it, you engage with it personally and blur the line between you as a personal user of digital and using it professionally until you become comfortable with it. Look at the WhatsApp phenomenon in India, if you go to a small town in India, and we do a lot of work there, you’ll find that the use of digital has taken off. It has taken off in communities that you would not imagine. It has taken off in the dramatic ways. Because this is not visible at a mainstream level It is not aggregated. We are ignorant of the fact as to what is the extent of adoption of digital that is taking place. So I think there is a shift that is already taking place which comes from personal usage.

The other is, again there’s a model that a linear growth takes place in a country. Today 21 years olds are being valued at millions of dollars. They are running large organizations. This old myth that there is an incremental step by step wisdom accretes over decades. You have to get in younger. You have to get into people who are digital natives to be doing this. It’s not just for this reason but I think that the overall assumption has been overturned and it’s time to embrace therefore the fact that the youth needs to be embraced much more.

How can startups build brands without burning up most of the funding in advertising?

The first thing when people talk about a brand is money and to me, money is not where it begins. Money is a way of expressing, it’s an enabler. It is not that it has no value but it’s an enabler. For a startup the most important thing in building a brand is to be clear about the idea that you have. What is your take on your category that is unique and distinctive? It is to articulate that. Today every action is branded. Some of the biggest brands in the world in the startup phase particularly are not built on the back of advertising. Uber and Airbnb are not built on the back of advertising. This idea that if I have to talk about a brand, I must constantly talk about money is a false connection. It is the power of the idea. Today you can speak through the persona of the leader. You look at what Tesla does. The very strong element of the brand is the persona of the leader. You can speak through the kind of attention that will be showered on you by media if you have a compelling idea. You can speak through each of your action. Yes, advertising is important but it is not an automatic response that you need to think of.

Cost and price of the products will come down considerably if endorsements by celebrities are stopped. We as a consumer are not influenced by them. Do you agree with it necessarily?

Well, you look at the world around you and you would have to say celebrities are certainly not irrelevant. Attention is a deficit and celebrities are the attention magnet essentially. The role of celebrity is to suck up attention in the world. Now, have brands started using them thoughtlessly, mindlessly? Are there several brands for whom the cost-benefit equation is negative? Without question! because it has become a habit and it has become a mindless habit. So to that extent, there is a case to be made for challenging the automatic adoption of a celebrity. But if at a large scale the consumer says that I am not affected by celebrities, they have no clue what they are talking about.