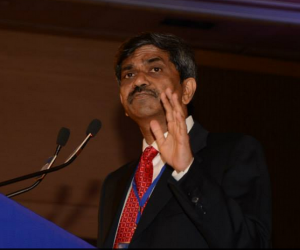 Thank you Ladies and gentlemen. We have already had 10 wonderful sessions and we have heard a lot on the theme of courage and uncertainty. I think, we can say if we conclude that uncertainty is here to stay amongst us and not go away.

How do firms deal with uncertainty? Some firms behave like an ostrich and soon they cease to exist. They are in denial mode and they start to externalise a lot. They start blaming others for their problems. Some firms get all rational and get into analysis paralysis mode. They think they are making great progress because of the number of slides and data points they have. This is what I call ‘death by PowerPoint’. Some firms get into an activity mode and unleash the activity trap, forgetting that the first thing you need when you go through an uncertain stage is focus. Some firms freeze, hence they lose. Some firms liberate to what I call emotional engagement. Courage is one part, logic many parts magic. And magic happens when we show emotions, when we tap into the emotional energies of people.

I want to show you a clip from the 1992 Barcelona Olympics and then I will talk about what happened after that to end with what courage all means.

From the video, Derek Redmond showed enormous courage in dealing with failure, 150 meters into the race and 250 meters to go.

His decision to complete the race shows determination. His hopping for 250 meters shows endurance through pain. His father’s act shows empathy, compassion and the need for emotional anchors in uncertainty. His tears show vulnerability. That’s what courage is all about. And courage shown through these emotions has an astounding impact on 65000 people in that stadium. He didn’t win the race but he won admiration for life and that’s what courage is all about.

Two years after this Derek’s doctor told him that he couldn’t run again because he had had multiple challenges with his feet. So Derek without losing dedication decided to choose another game. He picked up basketball when Toronto represented United Kingdom in basketball. So, Derek represented the country twice, once in athletics and second in basketball. This Barcelona video brought him lot of fame. This was used by the Olympic committee on a theme called ‘humanity’. It was used by the Visa brand to promote the Olympic movement. It was used by Nike for ‘Acts of courage’. And this is what the Olympic committee or the movement said of this film when they ran it. They said force is measured in kilograms. Speed is measured in seconds. But courage, you can’t measure it!

On that note I would end my session. Thank you ladies and gentlemen.

The above article is an excerpt from the speech delivered by Mr D Shiva Kumar, CEO PepsiCo & Past president AIMA  at AIMA’s National Management Convention which was held in September 2013