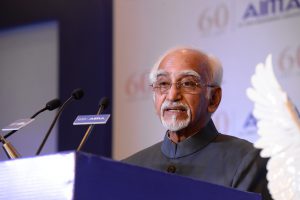 Shri Sunil Munjal, Shri Chandrashekhar, Shri Mohandas Pal, Shri Nikhil Swahney, Shri Sanjay Kirloskar, Miss Rekha Sethi, distinguished guests, ladies, and gentlemen. Some years back two management gurus had postulated that in a complex and dynamic global competitive environment adaptive capability is the key to survival and growth and that Indian businesses will find themselves on the road to rapid growth when they learn to think and act adaptively. The challenge before the Indian corporate sector today in the face of continuing low level of global growth and rapid changes in the technology of production and preferences of the end consumers is how to sustain their growth in times of recession that endangers protectionist regimes while competing in a fast evolving technological landscape.

It is a matter of concern that many Indian companies are finding it progressively harder to adapt to this competitive and restrictive scenario. Allow me, friends, to mention some harsh truths. For many Indian firms competition per say is a new phenomenon. Indian businesses have traditionally been risk averse. Most of our firms barring a few notable examples lack sufficient grounding and experience in global competition because of the absence of intense inter firm rivalry in their domestic business environment. Additionally, prolonged government protection has left them feeling complacent and ill-prepared to wage competitive battles at global levels. There is a genuine need for change in the internal environment of Indian firms that can foster competitive thinking and behavior. These inherent weaknesses of our corporates are compounded by the slow international growth over the last few years and the so called debt addiction of our firms. As signs of the economic slowdown become evident, investment in equity markets stagnated but corporate India continued to generate debt. Between 2009 and 2014 Indian corporate sector more than doubled its total debt, from rupees 20 lakh crores to over 41 lakh crores or roughly six hundred and ninety billion dollars. In a survey of over eighteen thousand companies in the CMIE promised database, it shows that in the past four years while aggregate revenue grew by 77%, their debt doubled and interest payout increased by 146%. At the same time, net profits decreased by 32%.

We are globally recognized for our service sector that contributes more than 60% to our GDP. It, however, does not account for as many jobs contributing only 15% of employment. A large and populous nation like ours needs manufacturing to be a significant part of the gross domestic product to ensure higher employment and prosperity. While domestic consumption in our country is on the rise making quick and deep inroads into the overseas market will help us accelerate growth. Further for profitable growth, we have to strive for a premium that will accrue only if we target products that need high-quality design engineering and manufacturing. Our manufacturing, however, needs to improve dramatically in terms of productivity and efficiency to compete in a globalized market. According to the Asian productivity organizations productivity database for the year 2014, the average total factor productivity growth in India increased from 2% in the period 2000 to 2005 to 4.7% in 2005-10 but fell by 0.9% in the next two years. In the year 2010-12, the TFP contributed 11% to GDP growth in India. By comparison, its share in China’s GDP growth was 26%. Currently, most of our companies operate at the bottom of the global value chain by selling components or unbranded products. This is true even of our firms in the service sector. The test before our companies is to develop business capabilities that equip them to compete at the top of the value chain. The make in India vision seeks to correct this. However, a much-wanted cost advantage may not be adequate to compete with other large products on the world stage. Given the relative size of domestic markets, it is unlikely that in the near future our firms will be able to achieve the scale that their competitors in East Asia established for several products. The advantage of scale coupled with cost advantage and strong government backing still make it challenging for us to compete on cost of most products despite the increasing labor cost there. In addition to the changing nature of manufacturing with the advent of new manufacturing techniques like 3D printing robotics and automation creates newer challenges for our firms.

A Recent feature in the mint newspaper took up the issue of growing difficulties before two of our celebrated success stories, the IT and pharmaceutical sectors where some Indian companies have become global leaders. The challenge to the IT and Pharmaceutical sectors are not dissimilar to the challenges before other of our manufacturers. Overcoming these challenges and the future growth of our companies will be in being able to create futuristic business scenarios and engineering disruptions rather than coping with its aftermath. In short, our firms will have to more innovative. Participating in the digital dialog in the year 2015, Prime Minister Modi had promised to give absolute support to make enterprise and innovation easier so that India emerges as an innovation hub and keeps pace with the fast changing world. He had said and I quote him “the world is changing quicker than ever before and we cannot remain oblivious to that. If we do not innovate, if we do not come up with cutting edge products there will be stagnation.” A report of NITI AYOG’s expert committee headed by Dr.Tarun Khanna for determining the contours of the Atal Innovation Mission notes that bringing about innovation has never been as important as today as the global economy shifts away from the industrial economy towards an innovation economy. This is sufficiently indicative of official thinking. Yet innovation does not happen in a vacuum or just because it is desired. The critical question was posed by Shri NR Narayan Murthy, a few months back. I quote him “why has there been no earth shaking invention or technology from India over the last 60 years”. The honest truth ladies and gentleman is that we lag behind many others including obvious.

The global innovation index for the year 2016 ranked us 66th out of 128 countries. Although this is a jump of 15 places over the last year’s ranking. India still lags behind China at 25, Russia at 43 and South Africa at 54. Such a dismal show is not surprising given our low levels of investment in research and development. According to the World Bank in the year 2014, India’s gross spending on R&D was about 0.63% of its GDP against 1.5% by China, 1.1% by Brazil. Many developed countries, on the other hand, spend up to 4% on their R&D. India was described as the top destination for foreign direct investment in R&D with our R&D market valued at 22.3 billion dollars in 2016. The domestic investment in R&D by our private sector, in contrast, remains minuscule as the government still accounts for 77% of all research spending in the country. India’s largest private company by market value, Reliance industries spent a negligible 0.32% of its revenue on R&D in the year 2015 while Larsen and Toubro, an essentially engineering company invested 0.36%. By comparison Petrobras and Petro China, two comparable countries from emerging markets spent 1.3% and 1% respectively. Siemens, the German engineering giant spent 5% of its revenue on R&D. The government offers several incentives including tax breaks to our companies willing to invest in R&D. Yet in 2016 only 1800 of our companies filed for such benefits. Thus merely offering incentives to industries may not be enough to spur innovative growth. Our corporate sector has to invest heavily in R&D and innovation.

We need comprehensive efforts to correct imbalances in education. Provide the relevant skills to our people not only for the job of today but for the jobs of tomorrow even as we invest more in creating infrastructure and conducive business environment. We do need to eventually work towards inculcating the culture and attitude needed to foster innovation and entrepreneurship.

A former governor of India the Reserve Bank of India in a talk at IIT Delhi had listed some of the ways for a nation to keep the idea factory open. The first essentially he suggested is to foster competition in the market place for the ideas by encouraging challenges to all authority and tradition and even while acknowledging that the only way of dismissing any view is through empirical tests. The second essential is protection not of specific ideas in traditions but the right to question and challenge, the right to behave differently so that as it does not hurt others seriously. In this protection lies societal self-interest.  “For it is by encouraging the challenges of innovative rebels that society develops.” Each of the above necessitates a scientific temper and a social ambiance conducive for it. And I did need not tell it to this audience how difficult that is in our daily life. We have seen cases in our business where in inspirational leadership style brings dynamism to a company. The business leader in whose memory these awards have been instituted was one such visionary. The very worthy recipient of this award Shri Chandrashekhran is an inheritor to great legacies of corporate leadership and has worked to take TATA companies to greater heights. I congratulate him for his achievements and hope that his example will continue to inspire our business leaders to excellence. Thank you very much for inviting me today. Jai Hind.