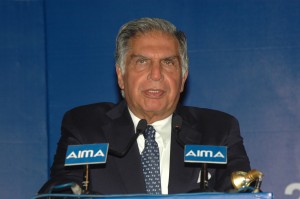 Ratan N Tata is the Chairman of Tata Group

On an evening like this one tends to be overwhelmed when you, if you might rendered a bit naked in terms of your past and even more embarrassing when what one has to say is nice and flowery so as I set listening to this my mind went back to the late eighties where we had all come to believe that JRD Tata who I love and adore like a father was immortal, one didn’t think what the Tata group would be without him and then one day all of that changed and he called me & told that he would like to step down. He was 90 years old and I would take over. I had the same sense of being lost when I was 17 years old and started flying.

The day instructor climbed out and said ” ok you are good enough to fly solo” “No maybe I’m not ready” and I had the same feeling the day I did that and when the shock of that subsided a bit, the next problem was how could I be stepping into his shoes, how do I clone myself to be JRD Tata and I very fast came to the conclusion that I couldn’t be and I shouldn’t perhaps be my own self and do whatever I could think of doing in my own terms.

At that time I would say I was very lucky because three things happened which set me on a path that I pursued. One was the Integrity and Value system that JRD had run company on which I was convinced we should continue on and perpetuate. The second was, the country just about to opening the economy, very fortunately at the same time that I took over and I was able to converge the view I had on what Tatas could do; unshackled from the license constraints and the same time venture in a new era of younger managers and newer technology to put so. The third piece of luck I had was the support and capability of the people at the Tata group, without which it wouldn’t have been possible.

It’s been an exciting time, very rewarding. As I stand here today I am very proud to be a Indian, at a time when India has emerged from being a developing country to becoming a power house in this part of the world and that’s a tribute to all the managers and the management CEOs and visionaries in this room and outside this room who have made India what it is today.

Ratan N Tata is the Chairman of Tata Sons. This is an excerpt from his key note acceptance address at AIMA Life Time Achievement Award for Management at a special award ceremony in New Delhi on 23rd March 2011.