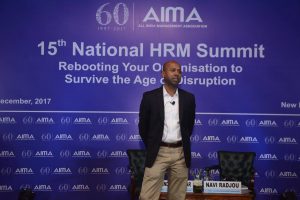 Assuming we are entering the age of disruption, that is going to happen and is already happening, it’s a given now. How are you going to deal with this disruption? I think there are two approaches, there is a smart approach and there is a wise approach. Of course, if I were standing at Silicon Valley, where I live, and ask these questions to HR leaders there, they will say of course we need to address this disruption smartly because it’s all about smartness in Silicon Valley. And it is true because in the Western societies and increasingly in developing countries like India, smartness, and particularly intelligence, sells well. We heard about marketing right? So anything smart packaged as a marketing slogan sells well, for example, smartphones, we will be wearing soon smart clothes, smart appliances at home, like smart fridges that talk to us. We also have smart homes and buildings now, and then everybody is obsessed now about building smart cities. And not only that, it goes even further because if you read Yuval Noah Harari’s book. It is about man’s attempt to become God. And his interpretation of God is the ultimate mind, the super smart, or as Aurobindo calls, the supermind. And what he’s saying is that essentially we are not smart enough and the rich people in the future will be able to use, like embed technology in their brain to augment intelligence, we call it augmented intelligence.

Therefore, he says in the future, there’s going to be a different kind of inequality, between the augmented haves and the augmented not haves. The augmented haves will be able to use these technologies to enhance the cognitive capabilities, the creative capabilities of our children will, therefore, be able to excel in school and therefore have a better career path compared to others who cannot afford to have these technologies that augment human intelligence. So smartness is actually glorified in most modern societies. And we also believe that smart entrepreneurs are the prototypical disruptors. In Silicon Valley, this is the term that we love. And of course, we admire disruptors like Steve Jobs, who has disrupted again and again many sectors with different products, Elon Musk with the electronic car, of course, disrupting the transportation sector. But I want to share with you this secret, it turns out that actually smartness doesn’t always give you what you want, as a matter of fact sometimes smartness or intelligence doesn’t take you where you want to go. Rather, it can take you to the wrong places, like to jail.

Which is what happened to Rajat Gupta. He topped his IIT Delhi class, became a Baker Scholar, which is summa cum laude from Harvard Business School, youngest to graduate from there. And then he ended up serving two years in jail. Because you are smart but you are unwise in other dimensions, the danger is that sometimes smartness can lead to disrepute, that’s why I said the smart disruptor sometimes can be unwise disreputers.  The same thing happened with Jeff Skilling, another Baker Scholar from Harvard Business School. Became the CEO of Enron, you remember that company? I still remember the 90s because they were glorified. World Economic forum, my own company Forts Research, we admired this company because, wow! There is an asset-light energy company that delivers energy without owning any assets. He ended up actually in jail as well. Because everyone realized that Enron is just a financial house of cards, it collapsed. And this also applies to a lot of Silicon Valley entrepreneurs. You may have heard about Elizabeth Holmes, she is a Stanford dropout. She dropped out so she can start her own company, Theranos. The promise of her company is that with a tiny droplet of blood, they can run a battery, an array of tests for a fraction of the cost that is charged today by clinics. And it turns out that it is all bogus.  In their heydays, this company was valued at 9 billion dollars, overnight, after FDA revealed that this device is not effective, she was worth nothing. So instead of rags to riches, she went from riches to rags. So again, smart person but unwise.

So what is smartness or intelligence then? Smartness is the faculty that helps us differentiate from others and win the race. It is all about me vs. you, and who is going to win the race. So the motivation underlying, the energy that serves intelligence is competition, and therefore it’s all about self-interest. And there are limitations to smartness that we are finally beginning to understand and realize today. Today is I would say, what we call the VUCA world, which is essentially volatility, uncertainty, complexity, and ambiguity, but also an increasingly globally interdependent global economy. So let me walk you through some more limitations of smartness.

First is that you can be smart today but not tomorrow, because the context keeps changing. So the best practices of yesterday become obsolete practices of tomorrow. The second limitation of smartness is that it is always anchored in the past or in the future because the smart leaders are either driving the car looking the rear view or driving the car looking through the binoculars. Therefore they miss what is right in front of them. They have a big accident, sometime would get injured, because they are not anchored in the present moment where the reality unfolds. The third limitation is that in an increasingly globalized economy, what is smart for one group of people here in this group in Delhi, may appear totally inappropriate for a group of leaders in Japan or London. So the cultural context needs to be factored in and be able to modulate the intelligence according to the cultural context which often is hard for leaders. The fourth one, I am actually a victim of this, is that smart people think they are good at spotting patterns and connecting the dots before everyone else. It turns out in neuroscience that the ability to identify the pattern is actually coming from the limbic system, which is the primal part of the brain. It is all about pattern. He says, attract opportunity, that’s all that matters. And what it does is that when he sees recurring patterns, something that happened in the past, he says wow this is it. Either run away from this danger or go for this opportunity. Sometimes it works, by luck. But if you repeat it over time, in a time series, you will realize you will make more mistakes by following these patterns and make strategic blunders than sometimes restraining yourselves from doing so. All this means that smartness can become very quickly an addiction unless it is anchored in wisdom, and that is going to be in a nutshell, the takeaway from what’s coming in the next few slides.

I and my co-author Prasad Kaipa found out that there is a spectrum of smartness and there are two poles or two kinds of categories of smartness. There are the leaders who are ‘Functional Smart’, they excel in operations, they have an incredible depth of expertise but they are also traditional. They value the traditions of the organization. Not because they think change is bad, it’s just that certain things in their organization they believe have value and need to be maintained. They have excellent executions and really focus on the bottom line. They are also sometimes too cautious and they don’t take reckless risks. Then there is another category of smart people that we call ‘Business Smart’. They are much more entrepreneurial like Steve Jobs. They are much broader in their thinking because they try to connect the dots. We heard about taking innovation from one sector, like x-ray devices, applied to inspect oil and gas pipelines. So they always think about how to connect dots across disciplines and functions. They are always visionary. They can think of things ahead of everyone else. Always focus on top line growth and sometimes very bold and reckless risk is taken as well. So just take a few seconds to look at this definition and look at where you fit in this kind of categorization, are you more a functional smart leader or more of a business smart leader. Most of you may be like a hybrid, but what we found is that over time, even though you may be fluctuating between these two kinds of smartness, over time because of your gunas or predispositions and proclivities swabhava or inner nature, or the cultural context of the company you end up being more often than not, thinking and acting a functional smart leader as opposed to a business smart leader. In most companies, there is a balance.

Both types of smartness are important, so if you look at when Apple had Steve Jobs until 2011, Steve Jobs was a quintessential rare business smart leader, very visionary, bold, and a risk taker. But he was tempered in his redness because red is fire (agni), he was tempered by the grounding earth element (Prithvi) which was actually the blue leader Tim Cook, who was fantastic in operational excellence, he was the head of the supply chain. He could deliver things on time under budget, so this combination between functional smart and business smart leaders was fantastic because Steve Jobs can conceptualize a lot of stuff and then Tim Cook can manifest it and make it a reality. It was like Shiva-Shakti. Now that Steve Jobs isn’t there I leave you with a question mark as to what’s going to happen to this visionary company in in the coming years.