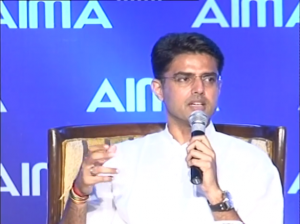 In one of the sessions that took place at AIMA’s 41st National Management Convention, Sachin Pilot, Political Leader (INC) and Former Minister threw light on the matter of Corporate Governance. He represented Ajmer constituency of Rajasthan at member of Indian Parliament in the 15th Lok Sabha. He was the Minister of Corporate Affairs and currently serving as the President of Rajasthan Pradesh Congress Committee.
He commenced his session by laying down the points he would talk upon. He said that he has identified few developments that he thinks are worth noting. He stated that he would along the way try to correct some misinterpretations. This is a strong view that Indian private sector works in such unique circumstances that it lies largely outside the pale of modern global management practices and nothing is farther from the truth. There was a time when good corporate governance was an inn innovation. Founder of management theories looked up to companies that worked fairly and well with misty eyes they hoped that good business practices would be refines and spread far and wide That diffusion has been uneven to say the least and even in India there are companies that integrate good governance in their DNA long before anybody else was looking at them. Leaders sense the need for and advantages of changes before others do. They realise that these practices are not just good by themselves but provide sustained support for the bottom lines.

He added that as hehas noted earlier evolving global standards are in fact driving this change. There are areas where we can learn from global corporate meltdowns and make sure that we don’t go down that path. There are those who are sceptical about empowering the minority shareholders. Many managers treat them as irritants that have to be humoured. But minority shareholders ought to be source of necessary advices. Many corporate disasters could have been avoided if these voices have been heeded to. If the board structures their interactions with minority shareholders, their inputs can be incorporated by formulating strategies and making mid-course corrections.
On the topic of women in corporate sector, he said that he has made many friends who are women and asked to become members of the board but awfully there have been criticism that there are only daughters and grand-daughters who have beenaccommodated in the board but he thinks that this will change because the laws have been enacted. There is a universe of talented woman who perhaps have not been given due recognition when the boards are being formed.

Further he talked on need of reforms required in the field of corporate social responsibility.He said that he feels that the communities want to see a visible project work being done there on the ground. Mere cheque writing is lightning one’s conscience the easy way. Bill and Melinda Gates Foundation, Susan and Michael Dell foundations and many others have been identified with particular interventions that are benefiting millions across the world. We can and should evolve our own methods of CSR that are practiced elsewhere but we certainly need to give CSR activities a makeover since profit making is often conflicted with profiteering in the popular imagination. Whatever approach companies approach, it should go beyond just talking and cheque-writing.

He conclude with the statement what we need to tell the world Is that we are here to do the business. We are one country, we are 1.2 billion people and someone from outside should not look at us for all the negativity. Even if there are few black sheep, it doesn’t mean the entire government is going to be corrupt. It is not about winning or losing, it is about how much economical potential are you unlocking in your time. So winning and losing is part of the democracy but we must stay true to the cause and stay together. This country deserves better and we can all work towards doing that together.

One thought on “Corporate Governance: A New Reality”