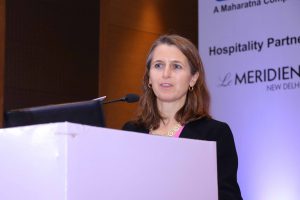 I wanted to start by giving a little background on myself and then share a couple lessons. I’m an economist, I earned a PhD and I’ve been a professor for over 20 years. My research focus is on energy and I’ve done several projects in India, although much to my great regret I don’t have a current project ongoing in India. I’m moving into the role of associate dean which is about as close in academics as you get, to being in a management position. In general, academicians are kind of single-minded and they don’t have much taste for being managed. It’s a very non-hierarchical environment, but as I said the associate dean is kind of as close to management as you get. I wanted to share my experiences, though I know that since I’ve been in the US and I’ve been in academics and not in business my experiences have been different from yours, but I think there’s still some general lessons that I can share.

Several weeks ago I was on a panel in the US for female high school students who were interested in mathematical fields including economics, and it was really interesting for me to hear from other women and hear some of their experiences and what their lessons were. Some of their lessons overlap with the ones that I’ll share.

The first lesson I want to speak about is about mentorship. Some people say you need to find a mentor. What I would say is kind of a variant of that which is defined as many mentors as you possibly can. Socialize or crowdsource this idea of mentorship. I’ve found that everyone has a unique perspective and you need to see what works for you. You need to understand where individuals and possible mentors are coming from; what their perspective is, and talk to other people and see. The more people you talk to, the more you learn different ideas, and the more you learn if you’re getting the correct advice. I would strongly encourage that. I firmly believe in mentors but I also believe that you can have one mentor for work issues, another mentor for work-life issues. You can have different mentors at different points of your life.

The second lesson that I wanted to share is really in the spirit of the conference – in the spirit of future proofing yourself. This was definitely a theme that came up on the panel that I was part of a couple weeks ago. This idea that change will happen. You will, very likely, go through at least several career changes. Some of the women that I was on the panel with had had dramatic career changes. There was someone who had been a professional dancer but had become a medical doctor; another person that had started a PhD and was on the road to be an academic but decided to go work for a start-up. Basically, there were seven other people on the panel and I was the only one who hadn’t had a real career change. I think that’s one way in which academics is different. In academics, it’s very easy to kind of stick in the same job – you have tenure – you can’t get fired – so it’s very easy not to have changed. Knowing that change will happen, I would encourage you going back to the first lesson to use your network. There’s someone else that likely has at least contemplated going through a similar change to the one that you’re thinking about. Someone else has likely done it and someone else can likely share the experience with you. I think in the spirit of thinking about change and leaving yourself options for change, I wanted to get my third lesson which is you should treat every talk you give as though it’s a job talk. So the way it works is, when you earn your PhD in economics, you prepare about an 80-minute seminar describing one particular research project. Then you’re invited to go to other universities and give this job talk. If you’re lucky, the job talks turn into a job, and like I said there’s a lot of job security in economics and in academics, so it’s kind of tempting to be complacent… You want to treat every time you’re giving a talk as though you’re giving a job talk – you want to imagine that people are considering you for a job. If you’re going to spend time on it, you want to do the best you can do. You want to put your best foot forward. I think one corollary of this is learning to say no. If you’re going to treat every talk as though it’s job talk, you want to put time into preparing it and you want to make sure you’re doing your best. So you need to as people have said, exercise the ‘no muscle’. I will say that these lessons are a mixture of things that I have done myself and things that I wish I had done.

The next lesson that I wanted to share is about work-life balance, and I would definitely encourage you to replace work-life balance with work-life integration. That is something that has worked very well for me. I have two children. They are now age 16 and age. My 18-year-old son just left to go to university. I will say it’s really tough when they’re young there’s kind of no two ways about it. If you have a baby, there’s just so much going on with them, that period it is very draining I think. After that period, I found that it worked for me to bring my work back to my home – to tell my kids what I was working on, discuss it with them, engage them with it. As they got older I’ve been able to bring my children on work trips with me. I’ve done the fair amount of work in sub-Saharan Africa, and I brought my son with me, I brought my niece with me, I brought my 81-year old father to China with me. I tried on this trip to convince my 16-year-old daughter to come. It didn’t work out in the end, but I hope the next time I come to India to bring at least one member of my family. I know that it doesn’t work in every work situation to bring your kids and expose that part of yourself so much. But I would encourage you to look for opportunities and definitely bring work back home. I think it has enriched my kid’s life and it has worked for us.

The last lesson that I wanted to share in the spirit of things that I wish I’d done, is not to beat yourself up – not to be too hard on yourself. This is also hearkening back to the idea of using your network and understanding that someone else has likely experienced something similar. Let me just give you one recent story. I was invited to another University recently, to talk to them about their energy programmes. They wanted to understand what UC Berkeley has been doing in terms of energy. One of the questions for me was “when you think of this university and energy what do you think of?” I was thinking to myself, ‘Oh my God! I should have gone to their website and done more research.’ But, I said ‘well when I think of energy I think of that there are several faculties who I know who do energy and you know I don’t think of anything kind of holistic in terms of energy at this university’. After the talk, one of the women who was on the panel that was interviewing, came to me and said ‘you know a week before you came we had Ernie Moniz, who was formerly the department of energy secretary in the US he answered exactly the same way when we asked him the same question’. I’d been beating myself up and telling myself that I should have done more research but I think it’s just one of many examples where it was perfectly fine. I think it tends to be a habit of women, as I understand from the psychologists, to be hard on ourselves, but I think you want to understand that there are likely other people who have gone through something very similar.

To conclude, I think it’s really important to learn from others and to begin to form networks. I hope that many of you will engage with this type of organization and come back and the years to come. Thank you!