AIMA organised an International Conference on the theme “Building Human Capital for the Knowledge Economy“, on 15th March 2016 in Dubai, United Arab Emirates. The conference was organized under the patronage of His Excellency Sheikh Nahyan bin Mubarak Al Nahyan, UAE Minister of Culture and Knowledge Development and brought together policy makers, CEOs, thought leaders, entrepreneurs and investors from both India and UAE to discuss strategies to promote cooperation between the two countries and win in the emerging knowledge economy.

Below is an excerpt from the speech of Mr Naresh Trehan, Chairman & Managing Director, Medanta – The Medicity on the theme “Health Hubs: Creating Global Healthcare Centres”. 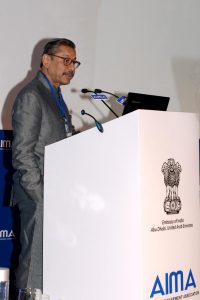 “Thank you AIMA for this opportunity to share the escalated progress of healthcare delivery system in India, which actually caught on fire about 15 years ago and now is growing at a CAGR of 15% and it is predicted that by the year 2020 will be 250 billion dollar sector. For many years the pharmaceutical industry in India has played well on the world stage by the generics and new molecules and is now the second largest makers of generic drugs supplied to the world. In last 40 years, the credentials of Indian doctors worldwide has been established, I was there for 20 years but I would like to share with you that 17% of all super specialists in America are Indians, 30% of the NHS system is run by Indians. The credentials, skills, and knowledge of the Indian doctors were already accepted across the world.  If you look at the way the healthcare sector built out itself in India – primarily before the 1980s it was the domain of the government, we had some charitable institutes and the level of delivery (except for a few well-established hospitals mainly in the government domain) was of very little quality of care.

Then in the 2000s the first step towards super specialty hospitals arrived. Apollo was the first chain; they started in 1984 and built out a few good quality well run current state of the art hospitals which offered care to India. Then in 1988 we established the first super specialty, single specialty hospital that was the ‘Escorts Heart Institute’. It was very clear that India was moving forward but the future was not looking so cohesive to be able to compete with rest of the world mainly the western world. In 2003 it occurred to me that India was not recognized as the country which had control over his own destiny in the healthcare and if you looked around in the western world there were institutions like Harvard, Mayo Clinic, Cleveland clinic, Stanford and John Hopkins. These institutions were providing the highest end of the healthcare and were the fountain heads of new knowledge; albeit the knowledge that they were actually producing was for their own people and for their own economies. If United states with 300 million plus people, after spending 2.5 trillion dollars is unable to give health care to their entire population and 50-60 million are always out of the loop, struggling for all these years and NHS struggling in the United Kingdom where the waiting lists are so long that in some of the critical care you can’t even get to a doctor. Then, for a country like India which has 1.2 billion people and our health care spend is dismal how would we provide healthcare to our people.

So we said that while we are actually pushing the front end, we also need to look at the bottom of the pyramid and I personally felt that we should build the Mayos and the Cleve lands of the east and that’s how the idea of ‘Medanta – the Medicity’ came. We opened in November 2009 and salient feature which were the required ingredients of an institution like Mayos and the Harvard was that we create a system which is not just a hospital, which delivers care to people but it must have the whole ecosystem in tandem to be able to achieve that quality and to also create the new paradigm for our own country for our own region and to create that you needed the infrastructure with all the safety features, research abilities, teaching abilities, the structure was created in preparation for that. The second pillar was technology that should be as good as or better than what is required to actually not only deliver the highest standard of care that we talked about but at the same time be able to chart our own future for research, teaching and developing the system.

There are very few institutions in the world that would have this kind of technology under one roof but the most essential ingredient was the human capital and the three things for the human capital to be part of Medanta  was that they must be benchmarked against the best in the world. Second, they must have reached a stage in their life where they are satiated and are willing to give themselves to teach and research and third their ethics should be impeccable because there will be the distraction of ethics, money, so nobody touches money in Medanta it’s all collected by the hospitals and everybody is full-time, after the taxes are deducted we get our cheque.

So if you look at this what I call the gallery of hoods, you would undoubtedly agree that this is a fantastic collection of people on the same platform. So the three ingredients became possible then we said how we function together? We do not function as our own specialty because the human body has all the specialties that are required in one form or the other if you look at the whole body rather than just one disease so with that the network between all the departments all the institutions was established in a way that we would have collective approach to patient care, so patient was given only one charge but he would have access to all the specialists around them and all the institutes would participate in the care.

If I give you an example of the cancer institute, every subspecialty has a specialist who will take care of that, so it’s not like the oncology surgeon would do everything but it’s impossible in today’s knowledge to actually achieve that excellence which is now expected by people and not only that if you are going to push the envelope of a country to the next level so this is how the institutions work; there are tumor boards, medical boards, internal medicine boards and there is what we call the heart team in cardiovascular so that nobody actually is given or not given the benefit. Every patient has the benefit that if they come for heart disease a non-invasive cardiologist and interventional cardiologist and the surgeon will look at them and decide the best treatment for that particular person.

The modern medicine has some great values. It is effective 95% of the time but while doing that we do only three things we either give poison which is antibiotics chemotherapy or we cut it out and I am the biggest culprit of that we split open chest 20 times a day every day and the third is that we radiate it with the most powerful being we can find to kill cancer but it has no relevance to the human body we do not use the human body to help us to deliver that care. Whereas if you look at traditional medicines whether it be Indian, Chinese or Yunani or wherever they always used the power of the body to fight disease so the question that begs is – Is there a synergy which if you work in tandem from what we know as modern medicine and what we know as the methodologies to boost the immune system? Cancer research has now after going through all the rigmarole has arrived at the same point that is immunology. The bull walk of cancer treatment  today is headed towards immunology that means that you are actually identifying the actual reason why that cancer happened, what the body can do to boost the immune system to fight it and in addition to that whatever external help we can give. So this is where we feel  that the money lies for us – to create that new medicine which will be an amalgam of all the things that we talked about and hopefully it will achieve two things – One it will be as effective as any other medicine available today including modern medicine  but at the same time less invasive because we destroyed the human body on our way to finding that solution and Second hopefully half the cost because there are 4 billion people today who cannot access the kind of health care that we talked about,  so do we have a responsibility as we move forward to do that.

Switching gears just to give you a little idea we at Medanta do 6000+ heart procedures, 4000+ orthopedic and then so on and so forth including kidney transplants, liver transplants, neurosurgery so there is a huge array of clinical material that we have and it is only natural that we take it as a great training ground for the future generations.

Now coming to what benefits this has brought to India we have a very large inward traffic for what we call ‘Medical Value Travel’ and it comes in three circles, India has been the traditionally the provider of health care to SAARC region to the south Asian continent which is by the way 2 billion people and then as I said there are two three billion people around us who need that kind of quality care that we just talked about. In my own lifetime when I finished my training in the US at New York University at least 300 to 350 Indians would come to America for the coronary bypass at that time in the early 1980s, today Americans come to India for the bypass surgery so you can actually see the cycle has been completed in my own lifetime that’s the potential of our region.

UAE is also moving rapidly in developing the facilities, wherever  the advantages are in the two countries we could actually leverage them to make this region the hub for all  future medical care because medical care today where people used to travel  is still single approach if you need some cancer treatment you go somewhere,  you need heart treatment you go somewhere, we need to develop those comprehensive facilities that in our own region we don’t have to travel for bits and pieces but that comprehensive care can be developed. It does not have to be too expensive, it can be created with efficiency including if we have proper training facilities for human capital because the future will be dependent today in India and with 330 plus medical colleges, we still produce only half the number of doctors that we need so there are huge opportunities creating new facilities in both areas collaborating on training and most importantly collaborating on research. India, UAE and the whole world is full of diabetes. Diabetes is one of the worst diseases you can have in some ways even worse than cancer because diabetes will destroy your whole body as it goes along, we have coronary artery disease gastrointestinal problem in which we need to do huge research together so the opportunity is there for us and if we can use platforms like this to actually start that collaborative process competing is I think it is a misnomer here we are all in need of it so competing is not the part of the question but to collectively develop that ability so that we can become the center of the earth for development of healthcare for this region which by the way is 4 billion people at the set.