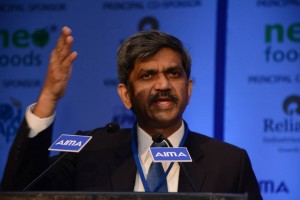 AIMA conducts its annual flagship event – National Management Convention with an aim to address the prevalent challenges of corporate ecosphere in India, their repercussion on the business scenario and deciding the tactics to handle it efficiently in coming years. A topic of national importance is taken as a theme in the convention and is addressed by The Convention addresses a topical theme of national importance and is addressed by prominent speakers from all spheres of life. Its grandeur can be understood by the fact only that last year almost 800 delegates from Industry, government, media and academia attended NMC and it is rising exponentially. There were number of prominent speakers this at 41st NMC. Topic of concern this year was “Changing Times: Reinventing the India Story”, and speakers from different fields of the industry put their thoughts through interactive sessions.

One such profound insight was laid upon by Mr. D Shivakumar, Chairman and CEO – India Region, PepsiCo India Holdings Pvt. Ltd. and former president of AIMA. In his session at NMC, he talked about reforms which should be undertaken when it comes to reinvent India for better. He said we have made progress and there is scope to achieve lot more in the coming years. He started his presentation with some facts. The people living under poverty line have come down to one-third, from its peak 70-80% to 33% in these years. Looking at the infrastructural growth now, ten folds growth has been seen in roads. Number of airports has reached to 125 and we now have 13 major sea ports in last 60 years. So it is clear from the numbers that we definitely have made progress in the infrastructure. Then he spoke about importance of women growth. Though literacy rate of women has risen from 9% to 74%, still involvement of woman in workforce needs to be worked on.

On the front of technological facts, aspired products of people have moved from owning bicycles to personal technology products like smart phones, tablets and much more. It is a mark of definite progress he said. Then he talked about these key reforms which should be undertaken for changing the face of progress in India. Firstly, there should be no small versus big ideology, ecosystem should be small and big working together. He further added that India is a scale country and we need to move forward from era of ‘jugaad’ to a thinking about brand, innovation and design to move up in the chain because then only it can contribute in reinventing India and products it has to offer. He also said that attitude should be changed. Mindset should be to put something back there as opposed to perennially complaining and moaning. What can I do to make a change that can make move forward? – This should be the point of ponder upon. Next point is about the lands. 90% of land is disputed and it should be reformed if we want anything to be done. Another thing is to invest in Teachers, if you want yield of high quality students. Focus should be on providing skills, not degrees along with emphasis on women. Last point on his presentation was of developing smart cities which involves lots of technology which will sure path to be taken for reinventing and changing times. He concluded by saying that if these little things are kept in mind, there is nothing which can stop in bringing a reinvented and desirable future.

The above article is an excerpt from the speech delivered by Mr. D Shivakumar, Chairman and CEO – India Region, PepsiCo India Holdings Pvt. Ltd. at AIMA’s National Management Convention which was held in September 2014.