The 42nd National Management Convention of AIMA was held in New Delhi from 30th September – 1st October 2015 at Hotel Taj Palace, New Delhi. The theme of the 42nd NMC was “Making it Happen: Leadership in Times of High Expectations”, and speakers from different spheres of life shared their views with participants through interactive sessions. KPMG in India was the Knowledge Partner for the Convention.

Below is an excerpt from the speech of Mr Kris Srikkanth, Former Captain of the Indian Cricket team and Former Chairman of the Selection Committee on the theme “Playing It Straight: Keeping Cricket Clean”. Kris Srikkanth’s Speech in AIMA’s NMC 2015 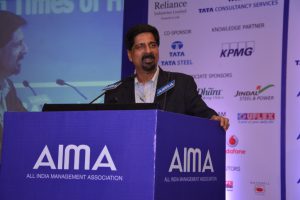 First of all I would like to thank Shiv (D Shivakumar, CEO, Pepsico India) for inviting me over for this function to come and speak at the Aima’s 42nd National management convention. In life, I played cricket and I played it for the passion. In my younger days, I wanted to be an engineer, I mean as usual coming from a typical middle-income family from Chennai the focus was on studies and I never wanted to be the cricketer but then it’s the God’s grace that my passion at the end of the day became my profession, cricket is still my passion.

And as you all know, the best way to play cricket is to play it with a street bat. I mean even in the younger days, even in the 20-20s today, even in the Test matches, whatever format you see the maximum number of sixes scored. It will be only in the long on, long off, straight region. So the moment you try to play across the line that means you break the rules of the game, you are going to be in trouble. Okay you might get 3 shots out of say 20 shots across the line which in Tamil they call kati, in hindi they call it aadha tedha shot whatever you call it but across the line in English, a cross batted shot in cricketing terms, you might hit a couple of sixes but don’t forget you are bound to get out, the chance of getting out is very very high. And you see all the great cricketers Sunil Gavaskar, Gundappavishwanathan, Sachin Tendulkar, Rahul Dravid, even Virat Kohli everybody all these guys are brilliant in the straight batting shots. So the best way to play the cricket, in my opinion, is to play it straight and play it fair.

I think the best thing to do is to bring in more transparency. Let everybody know what’s happening, let the whole world know what’s happening. In fact when I was the chairman of the selection committee, don’t forget this turbulent time is always bound to be there in our country be it business, be it personal lives, be it cricket, don’t you think all of us have these turbulent times? But then we all have the conviction that everything will be alright, everything will be fine, everything will be sorted out. I have the conviction as the former captain, as a former chairman I always believe that at the end of the day everything will be straightened out because you cannot keep playing cross body shots, you have to end of the day play straight shots. And I always believe the maximum number of sixes, even in 20-20 cricket are scored in long on, long off.  You see the number of straight sixes Chris Gayle scores. He probably got the maximum number of sixes in IPL. H 90 percent of his shots will be long on, long off or straight shots. So I think the best way is to bring in transparency.

As a chairman of selection committee, I made sure that whenever the selection meeting took place, I attended the press conference because the public at large has to know. They will ask you tricky questions but then as a chairman or as a leader all of us take the responsibility. They will ask you questions why did you not select Xand why you selected Y?. As a chairman, the worst job in the cricket is being chairman of the selection committee in India, I can assure you that because see the three guys are going to be equally good- ABC. If you say A, why not B and C. if you say C, why not A and B. But then what are we cricketers today, past, present, and future. It’s all thanks to people like you guys, thanks to cricket loving public of India. If any cricketer is popular or famous or made of lots of money, its because of the public of India. So if the public of India is going to be fooled then someday or other something is going to happen right and I think that happens always. That’s why I said you cannot keep playing cross batted shots, you will get out. You will get the top edge, ball goes up and you will get caught.

I want to talk on leadership in times of high expectation though it is not my topic, I am not supposed to be talking about it but that is something kind of related to this is. Yes this is where strong leadership counts We’ll have to believe that in country like India, the expectations are high. The cricket sponsorship has gone multi folds of what it was sometime back and I am so happy about it. We have to adapt ourselves to what is happening and move on with it. In 2011, when we were playing the World Cup in India, just imagine the high expectations of the public of India. There were one billion people praying for India to win, I said when one billion people can pray for India, definitely India has to win. You will have to have belief as a team or as a chairman of the selection committee or as the captain of the team. Imagine one billion people praying that energy itself is enough. In such times of high expectations, you will have to deliver and then what happens? Sometimes you cannot deliver. In April of 2011, they said Srikkanth you are the greatest chairman, , you are brilliant, just 4 months later, July-September 2011, we got thrashed in England for 4-0, who was to blame, when we won the team gets the credit which is naturally due but when we lose badly the chairman gets thrashed badly that is also naturally due. But that is what a leader has to do, at times of times of expectations when things go well, give credit to the team, when things don’t go well man you take up the responsibility. I am sure some of you must have seen the television interviews where I get blasted, I think you selected the wrong team. So at times of high expectation accept praises and off course thrashing in the same stryle than you will move on in life successfully. The same thing in cricket, this is the time but don’t forget the high expectation from the public of India that everything would get sorted in cricket, I can assure you it will happen automatically. Good luck, god be with you guys.